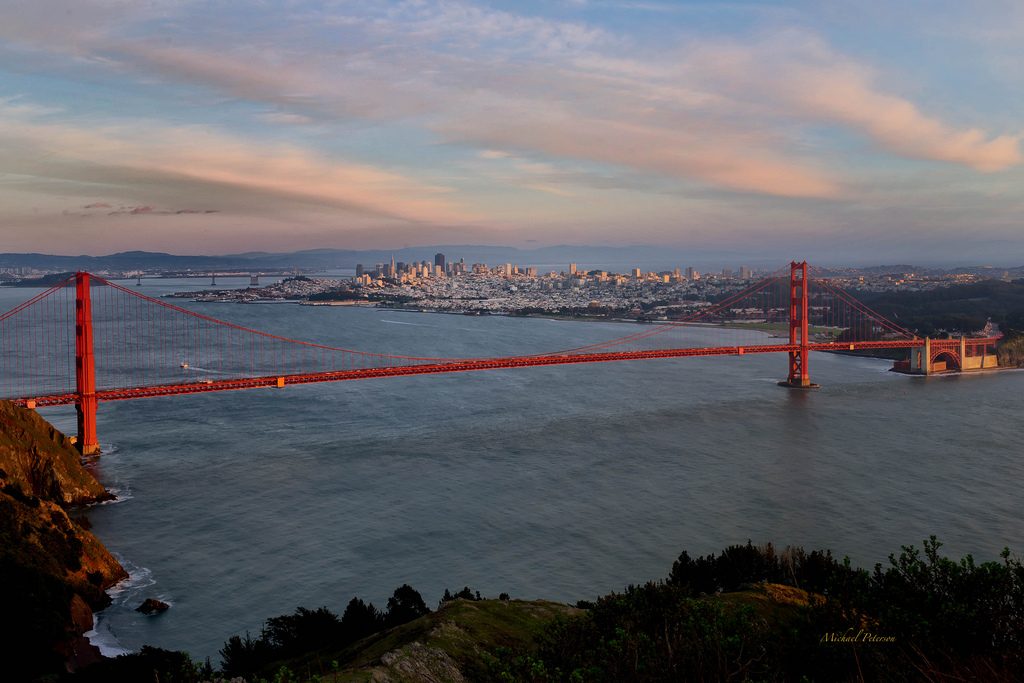 What is the Ministerial?

The Clean Energy Ministerial is an international forum for advancing collaboration and promoting concrete actions that accelerate the transition to renewable energy. Twenty-three nations including the United States, India and China, along with the European Commission will participate.

The meeting will take place from June 1-2, 2016 in San Francisco, California. As the first meeting of energy ministers since the adoption of the landmark Paris Agreement, the Ministerial is a pivotal moment to show the world that Paris was the start, not the end, of the clean energy revolution. It is also an opportunity for the United States to demonstrate its leadership in the global transition to a low carbon economy. Ministerial countries are responsible for 90 percent of global clean energy investments and more than 75 percent of global greenhouse gas emissions. Importantly, the next Ministerial in 2017 will be held in Beijing, China, indicating the commitment of China and the United States, the world’s top two emitters, to transition to renewable energy.

Far from a set of stodgy closed-door talks between government officials, the Ministerial will actively engage attendees with a series of roundtable discussions and a clean energy action summit where energy and business leaders can highlight their ambitious clean energy efforts. It will also feature a two-day exhibit in San Francisco’s Union Square to showcase technologies and innovative business models that are driving clean energy capacity growth around the world. Falling costs and growing capacity go hand in hand, as demonstrated by the figure below showing the dramatic reduction in the cost of wind technology, which has contributed to the similarly dramatic increase in wind capacity over the last decade.

Why is it important?

This will be the first Ministerial since 177 countries signed the Paris Agreement in April 2016. The central goal of the Paris Agreement is to limit the increase in global average temperature to well below 2°C above pre-industrial levels. The Ministerial allows high-level attendees to collaborate on clean energy deployment, which is a crucial step in reaching this goal.

The Ministerial aims to speed up clean energy deployment and policy adoption by pairing the high-level engagement of energy ministers with ongoing technical initiatives and campaigns. It has a proven record of being an effective forum for implementing clean energy policies and is a unique opportunity to bring together policymakers, visionaries and the business community to create the public-private partnerships that will drive the clean energy revolution.

In a sign that the clean energy revolution has already taken hold, 2014 was the first time in 40 years that global carbon emissions stalled while economic output rose. This indicates that large emitters like China and the United States are generating more electricity from cleaner energy and burning less coal. Renewables accounted for two-thirds of new generating capacity in the United States in 2015, according to the Federal Energy Regulatory Commission. As renewable growth accelerates and displaces fossil fuel-fired generation, it is likely that fossil fuels will never again make up the majority of new capacity growth in the United States.

The transition to renewable energy from carbon-intensive fossil fuels is not only the most effective way to reduce emissions, it is rapidly expanding new industries and creating jobs and investment around the world. Seven of the eleven years from 2004 to 2015 had at least double-digit year-on-year growth in new renewable energy investment worldwide, shown in the chart below. Total investment rose from $46.6 billion in 2004 to $285.9 billion in 2015. 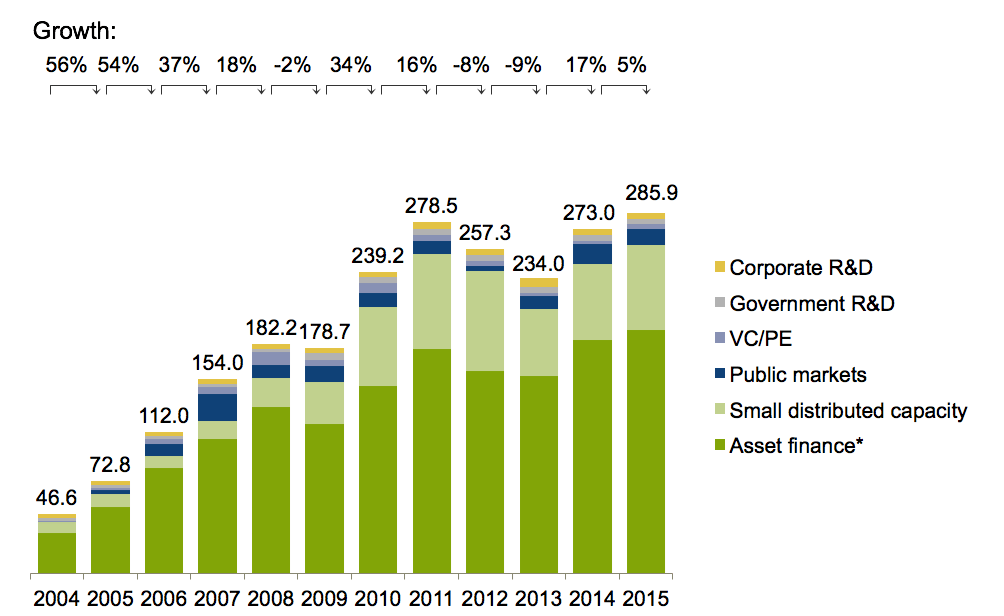 The Ministerial is one of the premier events where experts, policymakers and corporate purchasers convene to take advantage of the rapid growth in renewable energy and to accelerate the industry’s progress. Installed renewable energy capacity has steadily grown every year since 2001, as indicated in the chart below. While net additions of hydropower, bioenergy and geothermal have been modest, solar and wind energy each have had significant growth. 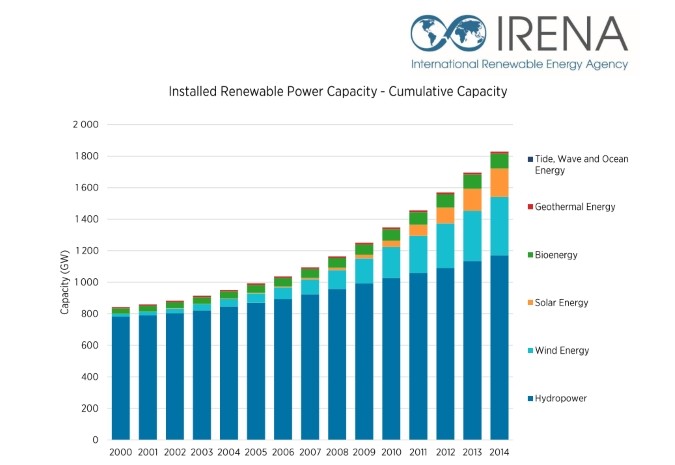 Global energy producers are firmly focused on a solutions landscape. Backed by a climate agreement that is more than 20 years in the making, the international community is coalescing around clean energy solutions to address climate change.

What will be the focus?

The main expectation for the Ministerial is to implement policies, programs and technologies that will encourage the transition to a global clean energy economy. The specific focus areas are corporate procurement, energy efficiency, government demonstrations of clean energy technologies and future policy for wind and solar. A separate event will be hosted on Mission Innovation, an initiative on research and development for future technologies. Announcements are expected on corporate procurement and energy efficiency. Of the dozen expected announcements on June 02, some are especially noteworthy:

Companies buying renewable energy capacity directly to power their operations are scaling up existing technology. During the first quarter of 2016, the U.S. wind industry installed 520 megawatts of wind power capacity, the strongest first quarter for installations since 2012, according to the American Wind Energy Association. The 2015 Annual Market Report from the American Wind Energy Association found that for the first time ever, non-utility customers (including corporations) signed 52 percent of the wind power capacity contracted through power purchase agreements for that year, more than doubling the 23 percent share from that market in 2014.

Since 2012, when Google was the only big company signing renewable energy power purchase agreements, the number of multinational companies buying into large-scale clean energy projects has grown to nearly 25, as shown in the chart below. 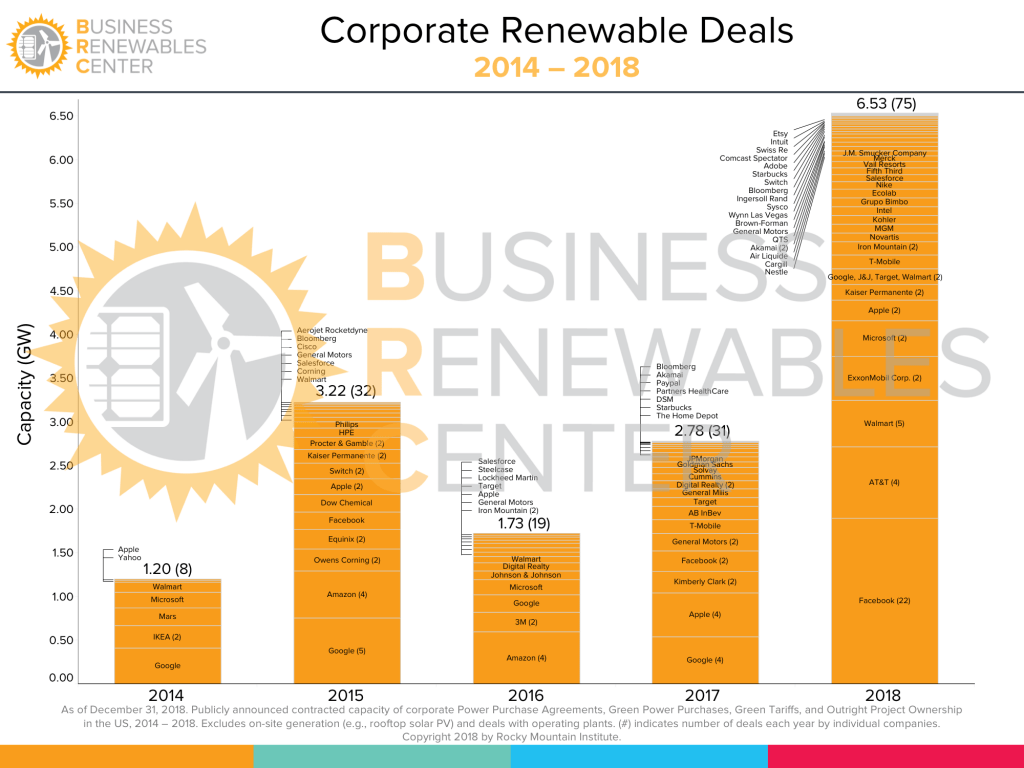 The dramatic fall in the cost of wind and solar power in recent years, along with the likelihood that costs will continue to drop, has made the prospect of major power purchase agreements attractive to large companies. The cost of land-based wind power in the United States has fallen from over 60 cents per kWh in 1980 to the more the cost-competitive range of 5 to 10 cents per kWh today. During the same period, the total installed wind power capacity grew from essentially zero to more than 65 gigawatts, enough to power 45.5 million American homes. Another 13.6 gigawatts of onshore wind capacity is currently in development.

The recent history of utility-scale solar power shows the same pattern of falling costs and increasing capacity. Since 2008, the cost of installing utility-scale photovoltaics has dropped from $5.70 per watt of generating power to only $2.34 per watt in 2014, a reduction of almost 60 percent.

Energy efficiency is one of the largest sources of savings for energy consumers and is a growing source of jobs for millions of Americans. The American Council for an Energy-Efficient Economy (ACEEE) estimates that the average American household spent $2,075 on home energy bills in 2014, but that much of that energy is wasted by inefficient appliances. New, efficient appliances and heating systems can save families around $500 per year, or nearly 25 percent of their annual utility bill. Saving energy also helps families on limited budgets: in 2010, the average energy upgrade for a low-income home resulted in $3,700 in saved energy costs and $14,100 in health benefits.

When comparing the actual, or “levelized,” cost of different power sources, energy efficiency is in fact the cheapest way to provide households with electricity. Saving energy at home costs only in the range of 2 to 5 cents per kilowatt hour, whereas wind power costs in the range of 5 to 9 cents per kWh, solar PV 9 to 11 kWh, and coal 5 to 15 kWh, as indicated in the chart below.

Jobs and revenue in the advanced energy economy, which includes energy efficiency, advanced fuels, vehicles, generation and distribution, have been growing rapidly for the last five years. In 2015, the United States had 2.7 million advanced energy jobs, a 10 percent increase from 2014 compared with a national employment growth rate of 2.5 percent. That’s twice as many jobs as building construction, more than agriculture and mining, and equal to total jobs in supermarkets and grocery stores. Seventy percent of these advanced energy jobs, 1.9 million, are connected to energy efficiency: upgrading building seals and ventilation, installing more efficient equipment and appliances, and smarter energy management.

Mission Innovation, established by 20 participating countries at the UN climate change conference in December 2015 in Paris, is an initiative to accelerate clean energy research and development (R&D). Each of the 20 member countries have committed to double governmental and/or state-directed clean energy R&D investment to $20 billion over the next five years. This new investment will focus on new transformational technologies that, when scaled up to meet market demand over the course of 20 to 30 years, could augment or potentially replace existing utility-scale photovoltaic panels, wind turbines and other existing technologies.

The Mission Innovation launch coincided with the launch of the Breakthrough Energy Coalition, a Bill Gates-backed platform for entrepreneurs, investors and businesses to fund and commercialize some of the innovative ideas that stem from Mission Innovation. Breakthrough argues that the current system of government funded research, private investment, regulations and subsidies is failing to create the kind of revolutionary changes needed to truly scale up renewable energy. While publicly-funded research can lead to the creation of industries that advance the common good, and the private sector knows how to build companies and take risks to bring new technology to market, each has inherent limitations. The coalition therefore established a set of investment principles to guide the public-private partnerships for which it advocates.

The work of Mission Innovation and the Clean Energy Ministerial are complementary — the Ministerial focuses on deployment of clean energy technologies that are available in the market today and how they can help us meet our short term carbon reduction goals. Mission Innovation focuses on “over the horizon” technologies that are not currently present in the commercial marketplace today but will help us meet the long-term goals under the Paris Agreement.