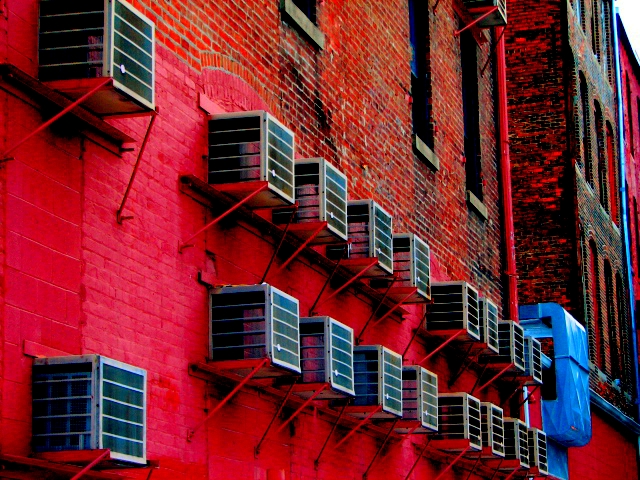 Reducing carbon dioxide (CO2) emissions is essential to solving climate change. However, another group of gases, known as short-lived climate pollutants (SLCPs), have a particularly powerful role in raising temperatures in the short-term. SLCPs include: black carbon, methane, hydrofluorocarbons (HFCs) and tropospheric ozone. Addressing them would quickly reduce the rate of warming this century.

In order to remain below the 2°C warming threshold and preferred 1.5°C limit, CO2 mitigation must be combined with reductions of SLCPs.

HFCs are factory-made pollutants used in air conditioning, refrigeration, foam insulation and other common products. Developed to replace the ozone-depleting chlorofluorocarbons (CFCs) and increasing at a rate of 10-15 percent a year, they are now the fastest growing greenhouse gas in the world.

HFCs are very powerful greenhouse gases (GHGs) because they trap thousands of times more heat in the Earth’s atmosphere than CO2. There are variants of the chemical, but the most common type is HFC-134a. It has 3,400 more global warming potential (GWP) than CO2 over 20 years.

The Institute for Governance & Sustainable Development (IGSD) states that “by 2050, HFC emissions will reach 5.5 – 8.8 Gt CO2 equivalent per year, which is equivalent to 9-19 percent of projected global CO2 emissions under business-as-usual scenarios and 28-45 percent under a CO2 stabilization scenario of 450 parts per million.” HFC emissions in developing countries are rapidly growing and predicted to be up to 800 percent greater than in developed countries by 2050. This shows how important it is to transition away from HFCs now, before building the infrastructure which would lock in those emissions for years to come. 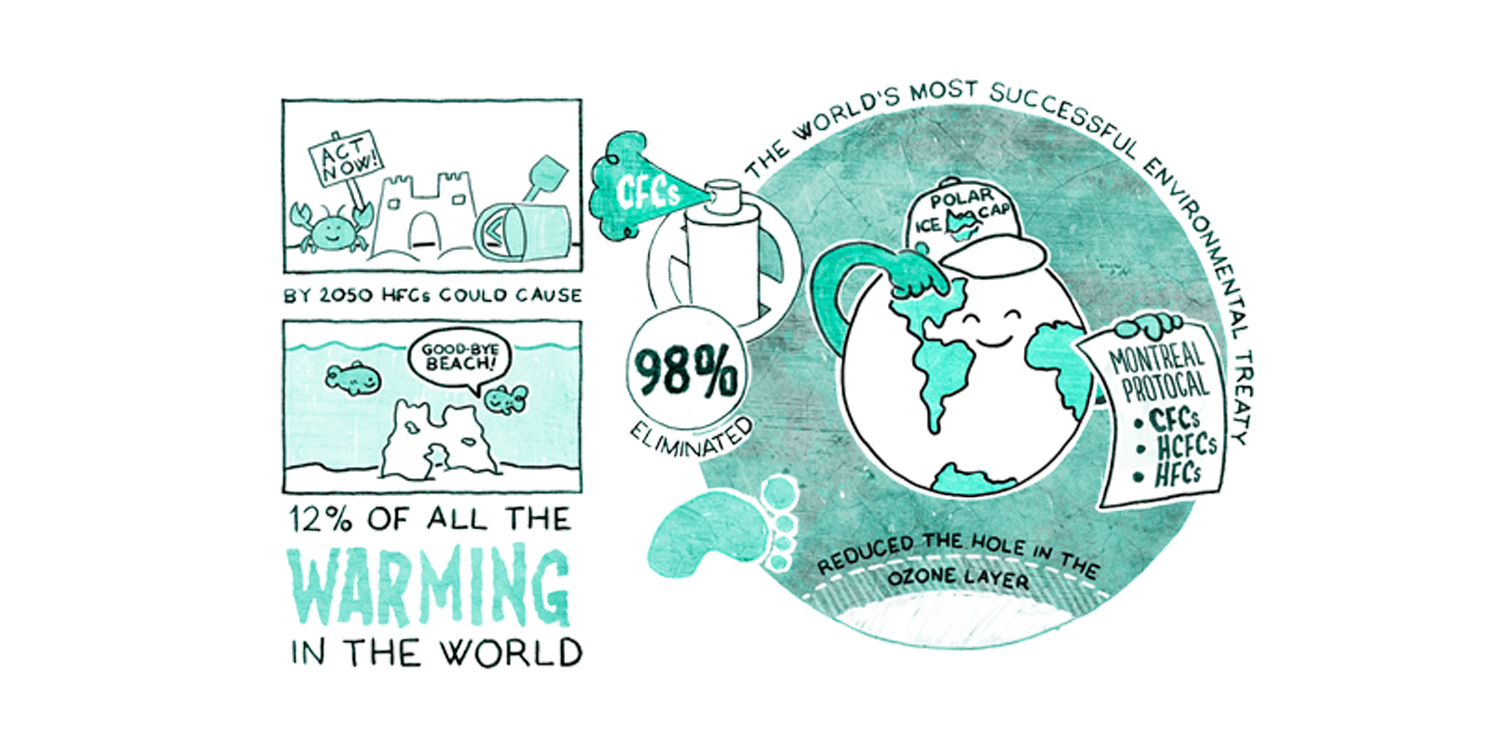 During the late 1950s and early 1960s, CFCs were used to make air conditioning inexpensive for homes and cars and their use grew exponentially during these years. However, CFCs were later found to undergo a significant chemical reaction in the upper atmosphere (also known as the stratosphere) where it released chlorine. The chlorine would then react to deplete the ozone layer, which absorbs harmful UV radiation before it reaches the Earth’s surface. Therefore, 197 countries have ratified the Montreal Protocol to Reduce Substances that Deplete the Ozone Layer to remedy the ozone hole. As of 2016, CFCs have been mostly phased out, along with 98 percent of almost 100 other ozone-depleting chemicals.

As a result, HFCs were developed to replace CFCs. However, a NASA paper published in October 2015 found that the five types of HFCs that are expected to contribute most to global warming also indirectly contribute “to ozone depletion by small but measurable amount, countering a decades-old assumption.” The warming in the stratosphere, caused in part by HFC emissions, speeds up chemical reactions that destroy the ozone molecules.

The Montreal Protocol and Phasing Down HFCs

In November 2015, the Dubai Meeting of Parties to the Montreal Protocol began the process of creating an amendment to phase out HFCs. The Montreal Protocol will provide many countries with the opportunities to quickly reduce HFCs, which can help achieve the Paris Agreement goal of limiting global warming to “well below 2°C above pre-industrial levels.”

At least 95 countries have indicated their support of a HFC phase down, including the U.S., India, the E.U., Canada, Mexico, a coalition of island nations and the 54 members of the Africa Group. The U.S. is addressing the phase out of HFCs at a state and federal level. China and the E.U. have announced new policies and regulations limiting HFCs in recent years. The production and consumption of HFCs can most effectively be controlled under the Montreal Protocol.

The Consumer Goods Forum (CGF), which has members from over 400 retailers, manufacturers and service providers, also supports the phasing down of HFCs and have pledged to decrease HFC usage by 2015. The Air-Conditioning, Heating and Refrigeration Institute; the European Fluorocarbon Technical Committee; Refrigerants, Naturally!; and The Alliance for Responsible Atmospheric Policy all support the Montreal Protocol and the phase down of HFCs and refrigerants with a high GWP. In October of 2015, 16 multinational companies, including PepsiCo, McDonald’s, Nestle, and Whirlpool, made pledges to phase down and replace HFCs and to commercialize alternatives.

Energy efficient alternatives to the HFCs already exist. A report published by the IGSD shows that alternatives are widely available for many refrigeration, air conditioners and foam uses. 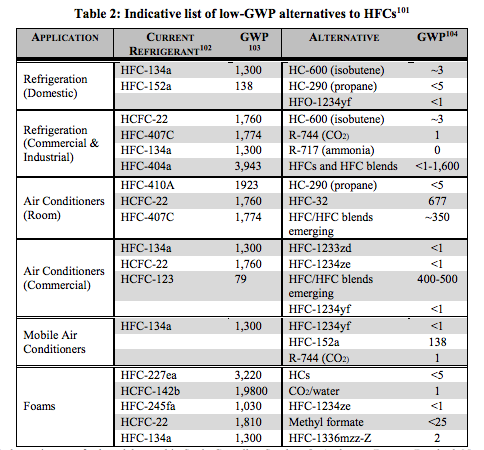 In refrigeration, the current HFC-134a and HFC-152a coolants have a GWP of 1,300 and 138, respectively. However, these can easily be replaced with isobutene and propane, which have a GWP of less than five. In air conditioners, the HFC-410A that is currently in use has a GWP of almost 2,000, compared to its propane alternative, with a GWP of less than 5. A more comprehensive list of alternatives to to high-GWP HFCs can be found in the March 2016 report by the Technical and Economic Assessment Panel (TEAP) of the Montreal Protocol.

The next steps will include: developing equipments, gaining regulatory approvals and addressing any servicing needs. Life Cycle Climate Performances also must be performed to calculate “cradle-to-grave” climate emissions for each alternative.