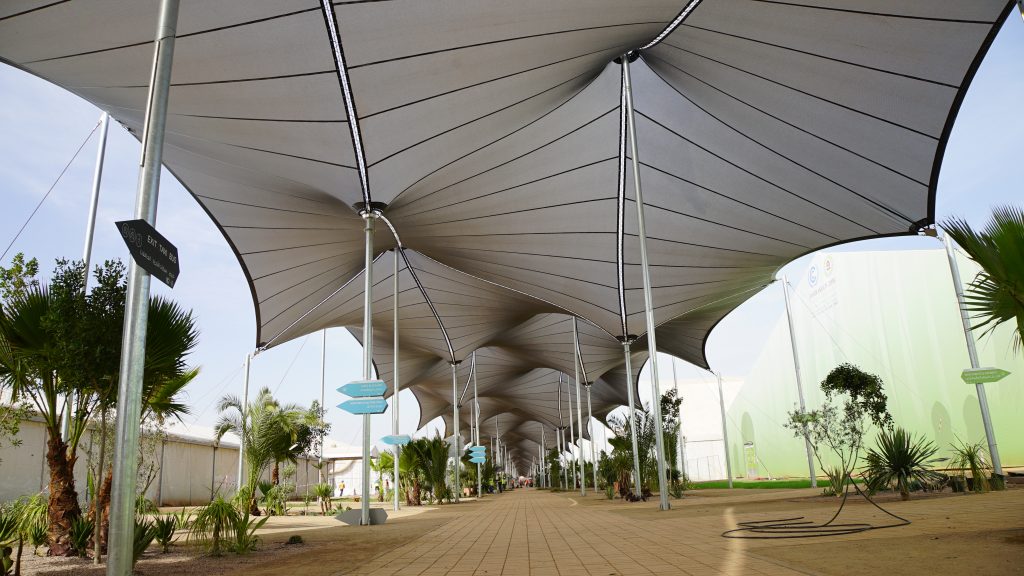 Ad Hoc Working Group: The Ad Hoc Working Group on the Durban Platform for Enhanced Action (ADP) is a body created by the UN Framework Convention on Climate Change (UNFCCC). Its mission is to “develop a protocol, another legal instrument or an agreed outcome with legal force under the Convention applicable to all Parties, which is to be completed no later than 2015 in order for it to be adopted at the twenty-first session of the Conference of the Parties (COP) and for it to come into effect and be implemented from 2020.”

Anchoring: The negotiation text that countries are likely to finalize in Paris will likely have a few distinct parts that serve different functions. The Paris deal is divided into three portions of text: the preamble, the Agreement, and the COP Decision. The Agreement portion is the most fixed of the three, while the COP Decision is likely to be the most flexible. Usually, countries want the issues and options they prioritize to have a place in the fixed Agreement part of the text. Anchoring refers to the process of securing mention of a provision in the Agreement portion of the deal, lodging the principle in the most durable part of the document and often elaborating on it elsewhere in the negotiation text.

AOSIS: The Association of Small Island States (AOSIS) represents 44 island and low-lying coastal countries with similar development challenges and environmental concerns. AOSIS lobbies and negotiates for small island developing states (SIDS) in the United Nations system. Climate change is a fundamental threat to many SIDS, and AOSIS has called for major global emissions reductions at every international climate negotiation. Some members include Cuba, Samoa, Trinidad and Tobago, Marshall Islands, and the Maldives.

Balanced text: Two different but interlocking ideals for the drafting process. The term refers to the ideal of a text that includes provisions for all the major pillars of agreement in balanced proportion.  In COP20 in Lima, counties agreed that the Paris Agreement “shall address in a balanced manner, inter alia, mitigation, adaptation, finance, technology development and transfer, and capacity-building, and transparency of action and support.  In recent intercessionals, there has been growing support among parties for inclusion of loss and damage in the Paris Agreement. Reference to a “balanced text” can also mean a text that is evenly weighted between developed country priorities and developing country priorities.

Brackets/Bracketed Text: During the drafting process, a number of options for the same particular provision, term, or action in an agreement are suggested by negotiators. Initially, all of these different options are under consideration. Negotiators know that only one option can make it into the final text, but until that decision is made, the various options in a text are demarcated using brackets.

Bridge-building text:  A piece of text that represents convergence on a particular issue by parties with differing views, often put forward by two parties or blocs that are currently championing two different text options for the same issue. Bridging text often builds by using different pieces of text from each of the different options or offers new text upon which parties can converge, identifying a third way.

Civil society: Refers to the non-governmental organizations (NGOs) and other groups, individuals, and networks that participate in the negotiations outside of a formal country delegation. Civil society is formally included in several facets of the UNFCCC process, including ADP and COP meetings, but civil society observers can be blocked out of some of the break-out negotiation sessions.

Convergence: Refers to the process of developing text that draws support from an increasing number of parties. By converging on an option—perhaps through the use of a bridging proposal—parties can find a safe landing zone with which every negotiator feels sufficiently satisfied.

Informal-informals: An informal-informal negotiation session refers to a discussion between negotiators that is carried out on the edges of the formal negotiations. These sessions can result in swifter progress and bridging proposals, as they allow negotiators to work in a different setting than spin-off groups.  However, the informal (and often limited) level of participation in these meetings means that any resulting progress needs to go through a legitimizing process before advancing in the more formal negotiations.

Landing zone: In negotiations, a ‘landing zone’ is text that is mutually agreeable to all parties. Relevant parties can identify a landing zone by sharing their views and determining where their interests overlap. Bridging proposals can be used to develop new landing zones in the text.

LDCs: Forty-eight countries are categorized as least developed countries (LDCs) by the United Nations. LDCs have been active as a negotiating bloc in the climate change talks in recent years, and often advocate for adaptation financing.

Like Minded Group/LMDCs: The Like Minded Group of Developing Countries (LMDC) is a negotiating bloc that represents over 50 percent of the global population. The LMDCs— which include Venezuela, Iran, Saudi Arabia, and India—indicated during the 20th Conference of Parties that common but differentiated responsibilities and capabilities (CBDR-RC) would be a critical issue during the negotiating process. Adaptation financing and historical responsibility are two common negotiating points for the LMDCs. The LMDCs also often advocate for the maintenance of the differentiation between developed and developing countries (Annex 1 and Annex 2, in UN parlance).

Means of implementation: Refers to the components of a deal that allow countries to fulfill their climate action plans. The main categories are: finance, capacity building and technology development and transfer. Without provisions for these components, countries may struggle to deliver mitigation and adaptation pledges.

MRV: MRV stands for Measurement, Reporting and Verification. It is the basis of the methodologies, rules and accounting standards that countries must follow when reporting their emissions. The verification aspect has in the past been the most contentious aspect.

Non-paper: An in-session document issued informally to facilitate negotiations. Non-papers lack legal standing. They are sometimes authored by the chairs of negotiation process or a sub-section of negotiators.

Party-driven process: A process led by participating countries rather than UNFCCC officials. Formally, the UNFCCC is a party-driven process as each country is a sovereign nation. In practice, over the years, working group co-chairs and the COP presidency have occasionally led negotiations more forcefully—with mixed results. The advantage of party-driven text negotiations is that the countries feel more invested in the process and more responsible for the negotiation outcomes, because they had more control and ownership over the text.  However, stronger leadership by the COP presidency or working group co-chairs can offer the advantage of quicker action and/or the forwarding of landing zones on which all countries can agree but no country or bloc will champion on their own.

Parties: Refers to the countries that have adopted the Framework Convention on Climate Change and now participate in the negotiations to forge an agreement that will deliver on the convention’s objectives. There are 196 parties to the UNFCCC. Parties can either be representative of a single country or of a regional block (like the European Union).

POTODOSO: Stands for “position to do so” and is usually used to refer to countries whose national circumstances allow them to participate in post-2020 finance, extending the groups of donors beyond Annex 2 to countries POTODOSO, rather than just those willing to do so. A POTODOSO designation helps move the talks past the Annex I/Annex II binary and towards a more nuanced understanding of action.

Ratchet mechanism: Parties will need to undertake major additional actions beyond the INDCs if they wish to keep warming within 2˚C. Towards this end, parties are considering whether to establish a formal system for revisiting international commitments for climate action, with the possibility of increasing the ambition and level of effort over time. The contours of a potential ratchet have emerged over the last few months, as the major emitters have agreed to support regular five-year reviews of commitments. There is growing support around including a progression clause that calls for countries to consider increasing their targets for mitigation.

SBI: The UNFCCC has two permanent subsidiary bodies, one of which is the Subsidiary Body for Implementation (SBI). The SBI advises the COP on the implementation of the UNFCCC.

SBSTA: The Subsidiary Body for Scientific and Technological Advice (SBSTA) advises the COP on science, technology, and methodological issues.

Spin-off group: A spin-off group represents a sub-group of negotiators assigned to work in a more informal setting on a specific issue, such as adaptation, technology transfer, or finance. These groups are run by co-facilitators, appointed from the ranks of negotiators,  and are assembled through the UNFCCC process.

Stocktake: During negotiating sessions, the chairs of the negotiations will periodically convene all the parties for a formal assessment on the status of the negotiations, known as a stocktake. The term ‘stocktake’ also refers to a provision in the draft Paris agreement to establish regular assessments of the progress towards meeting the objectives of the Paris Agreement.

Streamline/light edit: While in its draft form, a negotiating text will usually include several redundancies and extraneous text. Without making substantive alterations to the text, facilitators and chairs of the negotiating sessions can be asked by the negotiators to clean up the text by cutting away excess text—performing only cosmetic changes, not substantive ones.

The Vulnerables: Also known as the V20 Forum, this bloc represents twenty of the countries most vulnerable to the effects of climate change. The group includes some of the poorest and least developed nations across Africa, Asia, the Caribbean, Latin America and the Pacific, which are home to approximately 700 million people. The formation of the V20 group was intended to pool resources and press for tougher action on global warming, particularly the inclusion of a strong loss and damage provision and the fulfillment of the climate finance pledge. The members of the V20 are: Afghanistan, Bangladesh, Barbados, Bhutan, Costa Rica, East Timor, Ethiopia, Ghana, Kenya, Kiribati, Madagascar, the Maldives, Nepal, the Philippines, Rwanda, Saint Lucia, Tanzania, Tuvalu, Vanuatu and Vietnam.