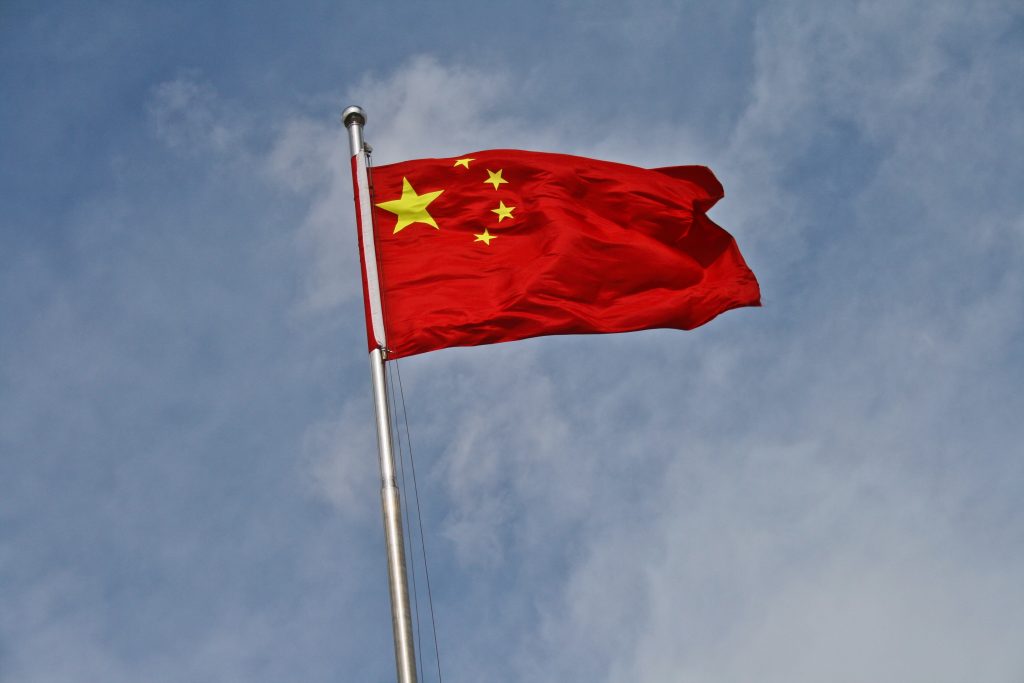 Leadership efforts on the road to a low-carbon future

China is home to 19 percent of the world’s population and the world’s fastest growing economy. Between 1980 and 2010, its GDP grew forty-fold. The Chinese government has recognized that the resource intensity of its economy is not sustainable and is increasingly encouraging growth driven by efficiency gains, technological innovation, and renewable energy.

On October 30th 2016, China formally joined the Paris Agreement, along with the United States. Its climate action plan, or Nationally Determined Contribution (NDC), reaffirms the terms of a landmark bilateral climate deal with the United States in November 2014. It pledged to peak emissions “by around the year 2030,” with best efforts to peak significantly earlier, and to increase the share of non-fossil fuels in its energy mix to 20 percent also by the year 2030. 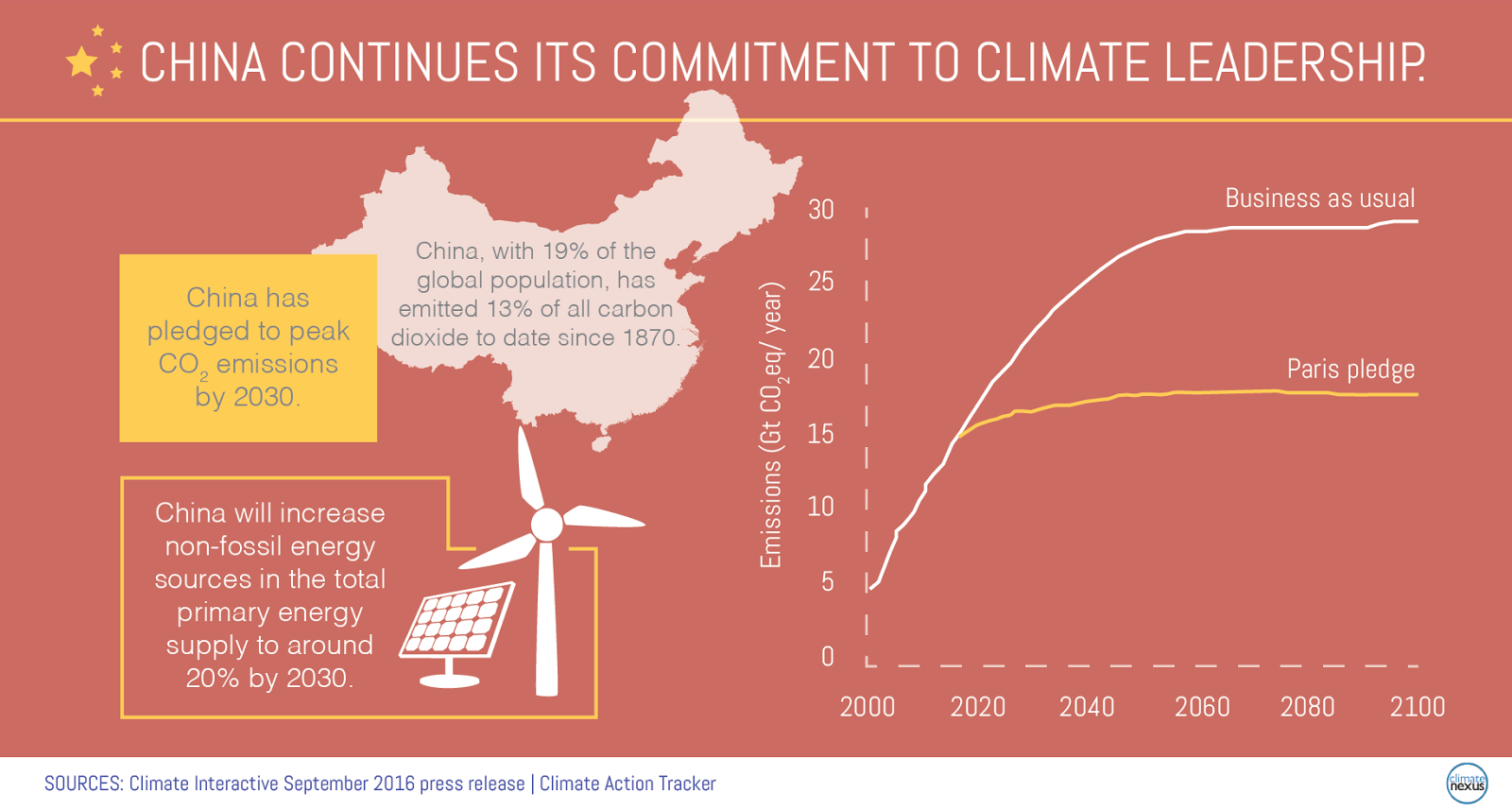 China also announced two additional targets: to reduce carbon intensity (the amount of carbon used per unit GDP produced) by 60-65% from 2005 levels and to restore around 4.5 billion cubic meters of forested land above 2005 levels. The International Energy Agency (IEA) calls China’s 2030 peaking goal “an important change in direction,” as the country is increasingly decoupling its economic growth from further growth in emissions.

China released the sections of its 13th Five Year Plan (FYP) dealing with climate and energy shortly before COP22 in Marrakech, institutionalizing its climate and energy plans.  The country is working to both cut down on air pollution and maneuver itself into a position to peak and then reduce emissions sometime in the next decade. China has also raised its profile on the international stage as a leader on climate action.

China’s negotiating position is driven primarily by domestic considerations—energy demand, smog and economic restructuring—but  international responsibility also plays a role. While China’s past and  current carbon pollution emissions are relatively modest for a country its size, its future emissions would exhaust the remainder of the global carbon budget if the country does not transition to a higher percentage of clean energy.

The data and analysis below aim to clarify the progress made and the promise for even more ambitious action going forward.

China is the world’s leading producer of renewable energy, and also leads the world in clean energy investment. The Chinese government is working to meet its massive energy demand at minimal economic and environmental cost, planning to invest $361 billion on renewable power generation by 2020. In 2015 alone, China put $103 billion into renewables, up from $89.5 billion the previous year. Renewable electric generation investment now exceeds all total investment in fossil fuel and nuclear energy.

Since 2007, the share of investment in renewables (as a proportion of all energy investments) has increased steadily, from 32 percent of the total in 2007 to approximately 59 percent in 2013. China installed more new non-fossil fuel capacity than fossil fuel capacity in 2013 and repeated that milestone in 2014. According to the country’s National Energy Administration, half of all new electricity generation by 2020 will come from wind, hydro, solar and nuclear power. By then, the world’s largest energy user plans to have 100 GW of solar and 200 GW of wind installed. This solar target could be met as early as 2018, according to Greenpeace.

China’s coal use and emissions may have already peaked. The IEA cut its coal growth outlook for China, reporting that the country’s coal consumption peaked in 2013. China committed to peaking its total greenhouse gas emissions by 2030, but the government’s annual statistical communique, released in February 2017, showed stagnant or decreased emissions for the third year in a row. Experts caution that it is too early to declare that China’s emissions have peaked, but the numbers are a marked improvement from the previous decade, when emissions rose as much as 10 percent per year.

In January 2017, the Chinese government canceled the construction of more than 100 coal-fired power plants across 13 provinces, representing 120 GW of capacity (equivalent to approximately one third of the existing US coal fleet). 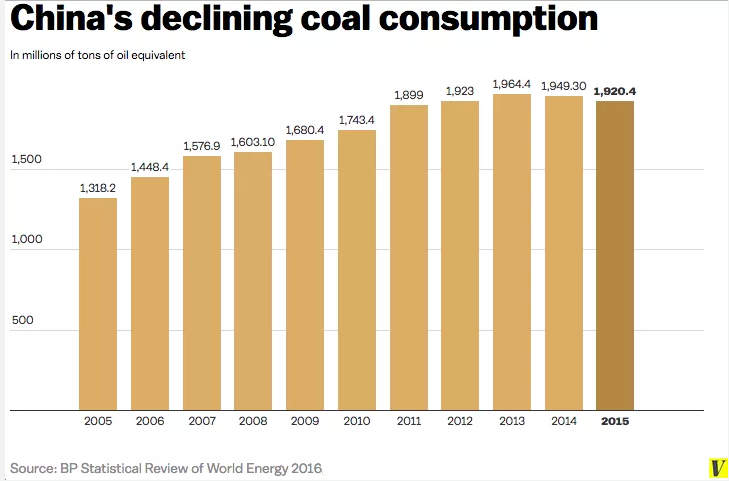 China is showing notable domestic political leadership on climate change. Several major Chinese cities, including Beijing – that cumulatively account for an estimated 25% of China’s urban emissions – have pledged to peak their emissions before the national 2030 target, some aiming for as early as 2020. China also plans to launch the world’s largest cap-and-trade program in 2017, which will cover six of its largest carbon-emitting industrial sectors, including coal. In September 2016, the People’s Bank of China announced new “Guidelines on Establishing the Green Financial System,” which will underpin domestic financing.