The United States generates about one fifth of its electricity from nuclear power, making it the country’s largest zero-emissions energy source. The national rate of nuclear power consumption has remained relatively constant since around 1990. Since 2013, five nuclear plants have closed in the U.S. and have been replaced mainly by natural gas and some wind, solar and energy efficiency measures. Four more nuclear plants are scheduled to close by 2025, and another four plants are at risk of closing after May 2017 if they fail to win contract bids at an upcoming grid operator auction. While some government-sponsored research claims that nuclear energy is necessary to cut carbon dioxide emissions, other research shows that the world can achieve its climate goals by completely transitioning from fossil fuels and nuclear to wind, solar and other renewable energy sources. Some states are deciding whether to subsidize aging nuclear plants to save jobs and protect local sources of tax revenue. There is a policy disconnect between the short-term horizon of state and federal energy planning, which often encompasses jobs and economic considerations, and long-term goals to reduce greenhouse gas emissions. As the nuclear fleet ages, policymakers will have to decide whether to subsidize these plants or replace them, likely with natural gas or renewables.

Pros and Cons of Nuclear Energy

Nuclear energy has consistently supplied about one fifth of the U.S. electricity demand since 1990, but its future trajectory is uncertain. The graph below shows energy trends over the last six decades:

Amid this shifting energy landscape, states are grappling with what to do with their aging fleet of nuclear power plants, most of which were built in the 1960s and 1970s and are nearing retirement age. Nuclear energy faces high operating costs and competition from cheaper gas and renewable energy sources, making the business of running the nation’s nearly 100 nuclear plants unprofitable.

Some states are exploring the possibility of subsidizing existing nuclear plants to preserve jobs and to achieve emissions reduction targets in the short term as the country transitions from fossil fuels to renewables. Other states are letting their nuclear plants shut down and replacing them mostly with natural gas generators, along with some wind and solar power plants and energy efficiency measures.

Government agencies, international organizations and academics differ on whether nuclear energy is needed to achieve national and international emissions reduction targets. Some consider nuclear as an indispensable low-carbon energy source that must maintain, or even increase, its proportion of the global energy mix while renewables scale up and replace fossil fuels. Others view nuclear as an antiquated, expensive option that survives only through subsidies and cannot ultimately compete with low-cost wind and solar power. Providing subsidies to nuclear power, they say, is simply wasting money that could be spent building out renewable energy.

Pros and Cons of Nuclear Energy

Nuclear power has advantages and disadvantages in terms of cost and emissions. Nuclear plants convert heat created by radioactive decay into electricity, and do not emit the high levels of carbon dioxide produced by fossil fuel-burning power plants, a major contributor to climate change. Nuclear plants also have a high “capacity factor,” meaning they generate more consistent electricity over a given period of time relative to intermittent sources with equivalent maximum capacity. That means that for every day, month or year that a nuclear plant operates, it generates more electricity than another power plant of the same size, but with a lower capacity factor. While this can be an advantage in providing power at a consistent rate, it does not necessarily compensate for the higher cost of nuclear compared to gas and renewables.

The levelized cost of nuclear power (the cost of building, financing and fueling a new power plant while removing all the subsidies) is relatively high compared to other energy sources: the minimum cost per megawatt hour for nuclear is $97, compared to $58 for utility-scale solar, $52 for combined cycle gas, and $31 for wind. Nuclear power is only able to remain viable in power markets due to subsidies. Other analyses of levelized cost show higher figures for all energy sources, but find the cost of nuclear is still significantly higher than solar, wind and gas. Capital costs to build nuclear plants can also run into the billions of dollars, and large plants operate on the old centralized hub-and-spoke model for power distribution, a model that runs counter to the decentralization of distributed renewable energy.

The capital costs for wind and solar technology are projected to decline through 2050, with the costs for concentrated solar power, solar photovoltaics and battery storage expected to fall the most rapidly by mid-century. The cost of nuclear energy, both for maintaining current plants and developing next generation plants, does not support the same downward price curves that exist for wind and solar. In fact, continued government support for nuclear energy is the only thing keeping the industry alive in the U.S., according to the Carlyle Group LP, one of the world’s largest investment firms. In 2016, America’s first new nuclear plant built this century came online in Tennessee, and the U.S. is currently building four other nuclear plants in Georgia and South Carolina. However, the majority of the world’s new plants are in China, India and Russia, all countries that heavily subsidize their nuclear industries. By 2040, the U.S. Energy Information Administration expects that China will account for more than half of total world nuclear energy growth.

Nuclear energy also faces the difficult challenges of disposal of fissile waste, the risk of meltdown from either earthquakes and tsunamis or terrorist attacks, and environmental damage caused by warm water discharge. Many Americans also simply do not want to live near a nuclear power plant for fear of exposure to radioactive material in the event of an accident, despite the low probability of that happening. According to a March 2016 Gallup poll, 54 percent of Americans opposed nuclear power and 44 percent were in favor, the first time that a majority of Americans were opposed to nuclear power since Gallup first posed the question in 1994. Some communities that are home to nuclear plants, however, are strongly supportive since they provide jobs and tax revenue.

The 10,286 megawatts of retired or retiring nuclear power represents approximately 10 percent of total U.S. nuclear capacity. In addition to the four plants listed above that are scheduled to close between 2019 and 2025, four more nuclear plants are at risk of closing after May 2017 when PJM Interconnection, the largest U.S. grid operator, will hold an auction to award contracts to power suppliers. If the nuclear bids fail to win contracts, the plants may be forced to close. The Palisades nuclear plant in Michigan may also shut down in 2018 due to “market conditions” that have “substantially changed.” The possible closure would be four years earlier than the plant’s contract expiration date, pending approval by the Michigan Public Service Commission.

Natural gas, renewable energy and relatively small amounts of coal and hydropower have replaced the generating capacity of the five nuclear plants that closed since 2013, all of which are detailed below:

Aside from the nuclear plants that have closed or will close in the coming decade, 55 percent of remaining U.S. nuclear capacity will have insufficient revenue to operate profitably in wholesale markets by 2019, according to an analysis by Bloomberg New Energy Finance. In the graph below, the vertical red bars on the left show the “negative profitability” of nearly 50 gigawatts of capacity in the U.S. nuclear fleet by 2019:

Price pressures from natural gas and renewables are not the only factors pushing many nuclear plants into retirement. Climate policies mandating emissions reductions are also having a mixed impact on the future of nuclear power. For example, in deciding whether to maintain or retire their nuclear power plants, New York, California and Illinois have chosen slightly different paths:

In order to meet emissions reduction targets, some pro-nuclear activists are urging states to integrate nuclear power into their long-term energy plans. The addition of nuclear power to state Renewable Portfolio Standards (RPS) would change these programs into so-called Low-Carbon Portfolio Standards (LCPS). According to the graphic below, the Department of Energy, 29 states, Washington D.C., and three American territories have RPS, and another eight states and one territory have Renewable Portfolio Goals. Standards are current state mandates on emissions and fuel use, while goals set future limits on energy use. 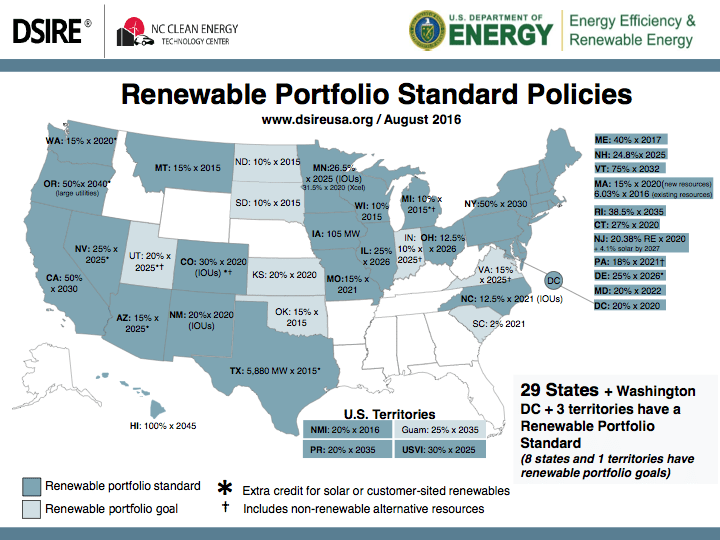 While most of the states with RPS currently have nuclear power as part of their energy mix, only three states — New York, Ohio and Illinois — are considering integrating nuclear power into their emissions reduction plans, effectively swapping their RPS for an LCPS: 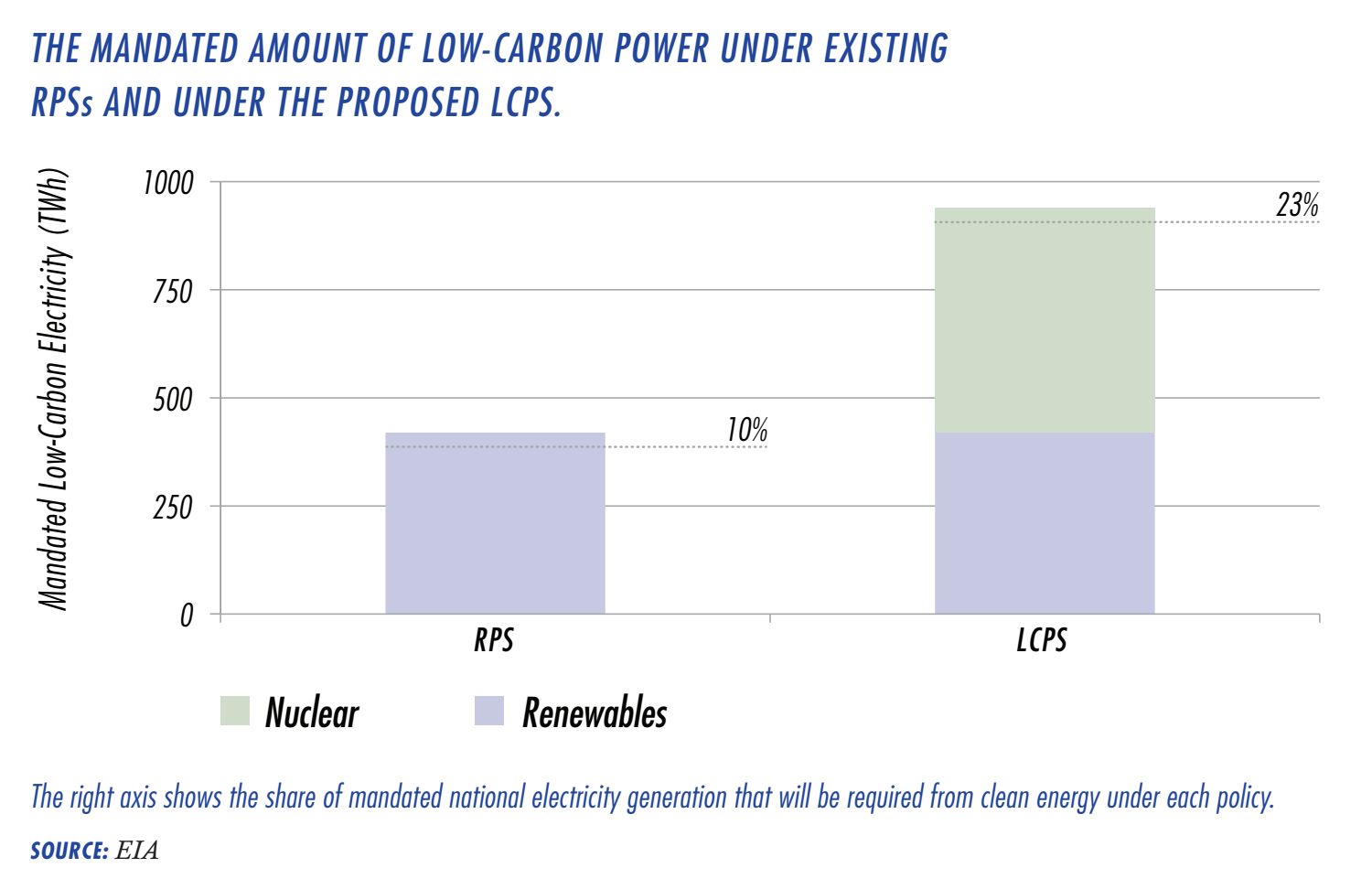 As the map above indicates, the 19 states that have RPS and nuclear energy far outnumber the three states that are considering LCPS. Nuclear power is a high-cost, low-carbon emissions power source that some argue should remain part of the energy mix as states and countries transition from fossil fuels to true renewable sources like wind, solar and hydropower. However, given the rapid installation rate of new utility-scale wind and solar projects in the U.S., California stands out as an example of a state that increasingly sees expensive nuclear energy as a less desirable option for meeting emissions standards.

There is a policy disconnect between the often short time horizon of state and federal policies that allow natural gas to replace retired nuclear capacity over the next ten to fifteen years and the long-term outlook needed to reduce greenhouse gas emissions and limit global temperature from rising 1.5°C to 2°C above preindustrial levels by mid-century. Some states have been rushing to replace ageing, expensive nuclear plants with gas because it is currently a cheap fuel source. However, there is a risk some or most of these plants will become stranded assets, saddling ratepayers with additional costs.

Two contrasting timelines exist: public policies that only extend into the next decade, and infrastructure planning by utilities that goes well into the middle of this century. Under these shorter-term policies, utilities are willing to invest heavily in new gas-fired plants that may have to be decommissioned should stricter emissions rules needed for the 2030-2050 period be implemented. Wind and solar power would likely replace those decommissioned gas plants in the future. In this scenario, investing in clean energy sources now would reduce costs for ratepayers over the long-term.