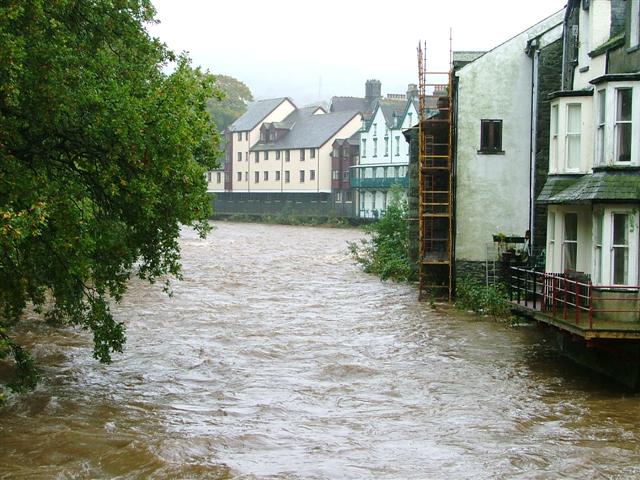 The severity of Storm Desmond in the mountainous Cumbria region of the United Kingdom is consistent with observed regional climate change trends and projections, including increases in the heaviest rainfall events and the occurrence of persistent atmospheric rivers. It’s likely Desmond also gained strength from Atlantic sea surface temperatures that are 1.8°F (1°C) above average and global-scale warming that adds extra moisture to the air.

The UK Met published a study in November 2015 showing that, thanks to climate change, the odds of extreme rainfall increases by eight times during winters in the UK that have Desmond-like atmospheric river patterns. The study also finds that climate change increases the chance of extreme heavy rain over 10 consecutive days by seven times.

A 2015 study by Jamie Hannaford summarizes the science on climate-driven changes to UK water flows and finds “an increase in high flow magnitude and duration,” or the most extreme events, from the 1960s to the early 2000s. Hannaford also cites studies that find links between climate change in the UK and seasonal rainfall (e.g. Murphy et al., 2009), extreme rainfall (e.g. Fowler et al., 2005) and river flows (e.g. Arnell, 2011; Kay and Jones, 2012).

Studies have also demonstrated the importance of atmospheric rivers in causing winter flooding and extreme rainfall in the northern and western UK, and while there has been no analysis as to whether human-caused climate change has already made such storms more frequent, atmospheric rivers are expected to become more frequent in the future due to global warming.

Met Office Chief Scientist, Professor Dame Julia Slingo, says, “just as with the stormy winter of two years ago, all the evidence from fundamental physics, and our understanding of our weather systems, suggests there may be a link between climate change and record-breaking winter rainfall.” Slingo does go on to say, however, that, “It’s too early to say definitively whether climate change has made a contribution to the exceptional rainfall.”