This Thursday, September 17, the National Oceanic and Atmospheric Administration (NOAA) will likely confirm other sources’ finding that August 2015 was the hottest August in the global temperature record by a wide margin. NOAA will also likely confirm that this year’s June, July, and August comprised the hottest June-August period in the global record. Earlier this year, the March-May period of 2015 was the hottest spring quarter on record in the Northern Hemisphere.

Many scientists who track global temperatures say that 2015 is all but guaranteed to be the hottest year on record, exceeding last year’s record-breaking temperature (1).

The record heat from June through August fueled a summer of extremes in the Northern Hemisphere, and the trend is likely to continue as the 2015 El Niño gets stronger towards the new year (2).

“[Record global heat] is yet another reminder that global warming continues apace. Climate change is no longer a challenge facing future generations: we are experiencing its impacts today. Not only that, but we will continue to see these records being broken, year after year, until we are able to wean ourselves off our addiction to dirty, old-fashioned fossil fuels.”

Accumulated CO₂ and other greenhouse gases in the atmosphere are steadily trapping more and more heat on Earth. As the Earth heats up, the added heat energy circulates through the air, land and ocean, driven by long-standing climate patterns. Over 90 percent of the additional heat enters the ocean, with a large percentage of heat ending up in the deep ocean (3,4). As a result, the oceans have been warming steadily and rapidly with no slowdown. During some climate events, such as La Niña, additional heat gets buried. In a La Niña period, the full impact of global warming is hidden, until that heat is released back into the atmosphere during circulation processes like El Niño. Consequently, the warming of global surface temperatures due to climate change is uneven, slowing down in some years as more heat is buried in the oceans and accelerating sharply in other years—such as El Niño years—when surface temperatures spike.

The El Niño Southern Oscillation (ENSO) has important implications for surface temperature observations. During the positive phase of ENSO (commonly known as El Niño)  some of the added heat that gets stored in the ocean spreads out and is released back into the atmosphere, causing large-scale atmospheric circulation changes and an increase in global temperature. The combined effects of this phenomenon and human-caused warming are fueling 2015’s record heat.

Scientists predicted the possibility of back-to-back record heat years soon after 2014 became the hottest year on record, due to the likely emergence of an El Niño event that would boost global temperature even further (5).

Prior to 2014, which had some but not all the characteristics necessary to declare an official El Niño event (6), two El Niño years—2010 and 2005—were tied for the hottest year on record. Scientists predicted that the emergence of a strong El Niño event in 2015 would very likely lead to another record-warm year, because records are traditionally broken when natural variation and human-caused warming run in the same direction.

NOAA officially declared El Niño’s arrival on March 5 of this year, and by September 2015, it already ranked as the second to third strongest ENSO on record (7,8). The 2015 event will likely peak in the fall and last through the winter, with a chance that it could even become the strongest on record. Satellite observations and computer models from NOAA’s September El Niño report point to sea surface warming in the Pacific Ocean that is on par with conditions seen in 1982-83 and 1997-98—the two strongest El Niño events on record (9).

June, July and August—the three hottest months of the year globally—each set new temperature records for their months, with NOAA’s official announcement for August expected on Thursday, September 17 (10,11). July’s monthly average was the highest on record for any month since 1880 when records began (12). Also this year, February, March and May broke their monthly temperature records. The remaining months of 2015, January and April, were not far behind. January 2015 was the second warmest January on record and April 2015 was, the third warmest April.

In sum, six of the first eight months of 2015 were the warmest of their months in history, due to the combination of El Niño and human-caused warming. As a result, it is all but certain that 2015 will beat out 2014 as the hottest year on record. Additionally, depending on how fast the El Niño event dissipates, 2016 could be even hotter (13).

“I would expect that we could break the [hottest year] record by close to 0.1°C. That’s the range we’re in now. It’s higher than we typically see when we break a record, where we see a hundredth or two-hundredths of a degree. So this is quite a large margin.” 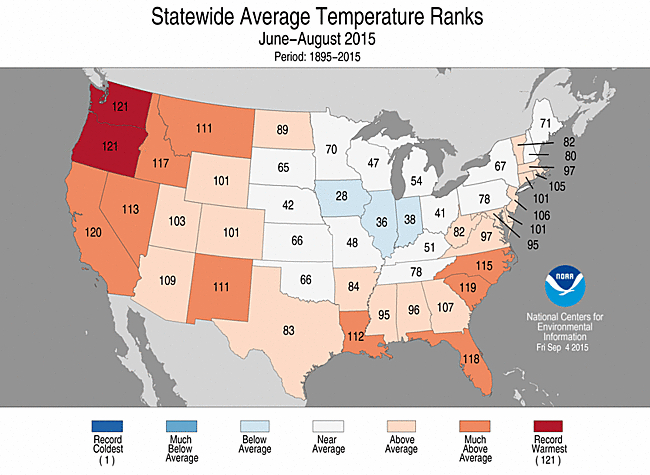 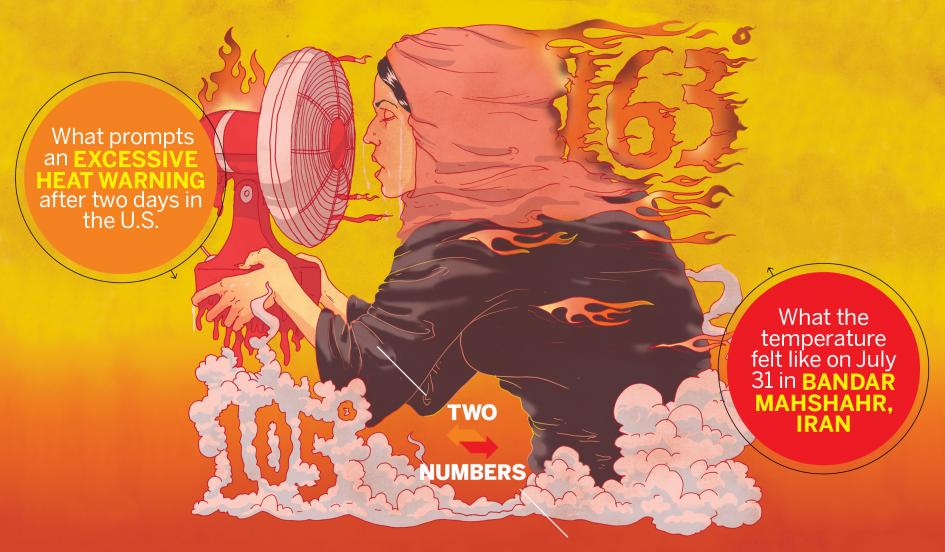