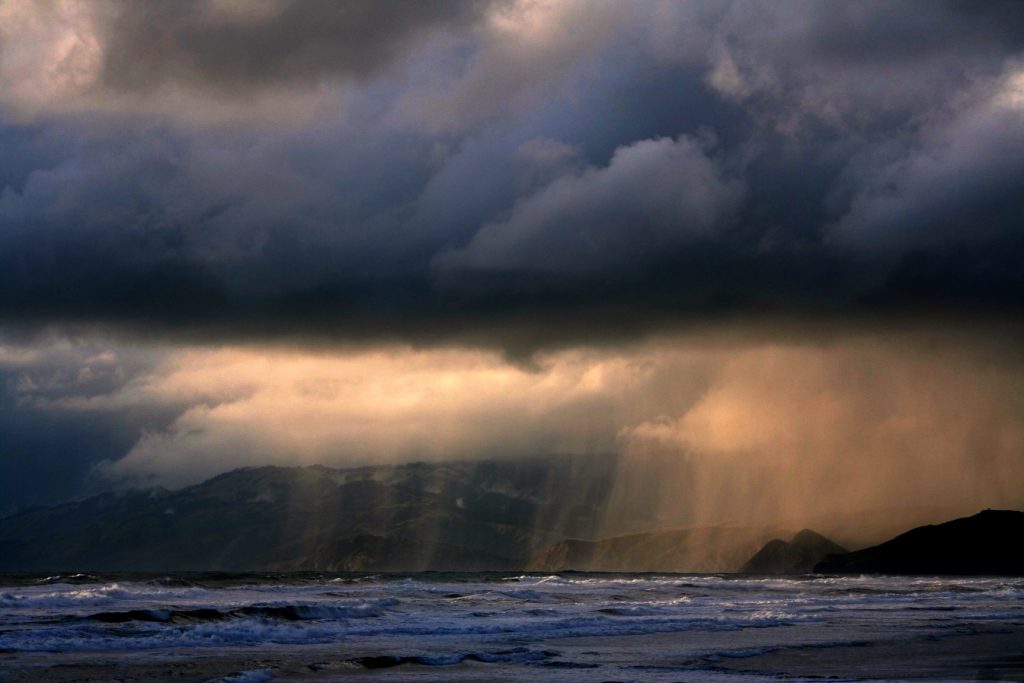 With the drought-causing high-pressure zone dubbed the “Ridiculously Resilient Ridge” pushed aside for now, a powerful storm associated with what are called “atmospheric rivers” is currently drenching the California Bay Area. Atmospheric rivers are relatively narrow, long streams of clouds and atmospheric water vapor that are associated with major storms in the Pacific. These streams, many of which originate from Hawaii or beyond and are known as the “Pineapple Express,” bring moisture from the Tropics into the West Coast. “It’s essentially a fire hose of water brought up from the tropics that comes up and crashes into the West Coast,” said Michael Dettinger, an atmospheric scientist with the Scripps Institution of Oceanography in La Jolla.

Atmospheric river storms are responsible for 30-50 percent of all the precipitation in California and are also responsible for over 80 percent of major flooding events. Climate research indicates that the impacts of these storms are expected to escalate dramatically if carbon emissions continue along the business-as-usual path, and that atmospheric rivers may already be impacted by current warming:

The current storm is expected to be one of the most severe in five years, with high wind speeds up to 65 mph and 2 to 6 inches of rain expected through Friday for San Francisco, Sacramento, and other northern cities. Conditions are so severe that the San Francisco Unified School District announced on Wednesday, December 10 that it would close schools on Thursday, when the heaviest impacts will likely be felt. At least four local rivers in Northern California are forecast to peak above flood stage late Thursday or early Friday, adding up to 32 feet of water to their nearly dry banks, according to National Oceanic and Atmospheric Administration charts. With this amount of rain at the tail end of California’s driest year on record (and in at least the last 1,200 years), which led to a devastating wildfire season, NOAA has also advised locals to watch out for periods of heavy rain over recent burn scars that could cause debris flows and flash flooding.

In the past half-century, climate change has charged the atmosphere with more water vapor, fueling extreme precipitation and loading storms of all types with additional moisture that ends up as rain and snowfall. The fingerprint of global warming has been firmly documented in the shift toward extreme precipitation already observed in the northern hemisphere. In the particular case of atmospheric river storms in California other factors, especially wind strength, can also influence how much rain is wrung out of the storm. We are still learning how climate change may be affecting those factors.

The atmospheric rivers that arrive in California collect moisture over a large swathe of the tropics, including the extra water vapor added to the atmosphere by global warming. This water is then delivered to California through the end of the storm hose, creating torrential rain and floods.

Since 1950, atmospheric river storms have been responsible for 81 percent of the most well-documented levee breaks in California’s Central Valley and 80 percent of the flooding in California rivers. In delta areas, such as the San Francisco Bay, climate change puts the region in double jeopardy. Climate change contributes to sea level rise, which adds to the flood levels pushed up by the atmospheric river storms. Since 1854 sea levels have rise about a foot in the San Francisco Bay.

Temperatures off the California coast are currently 5 to 6°F warmer than historic averages for this time of year—among the warmest autumn conditions of any time in the past 30 years—which could intensity the current atmospheric river storm. While connections between global warming and the current, unusually warm waters off the California coast are not fully understood, the warm coastal conditions are known to be linked to rare changes in wind patterns. Winds that normally blow from the north, trapping warm water closer to the equator, have slackened since the summer, allowing the warm water to move north.

And a More Intense Future

Looking ahead, the computer models predict that climate change will cause the very worst atmospheric river storms hitting California to become much more frequent and larger. One model illustrating the impacts of a large-scale atmospheric storm, similar in scope to the infamous river storm of 1861 that turned the Central Valley into an inland lake, found that such an event would inflict over $400 billion in damages in modern day California.