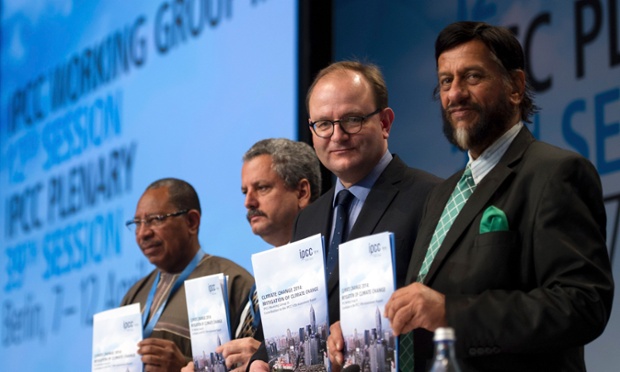 AR5 reflects advances in science that point to increased levels of certainty on issues already raised and provides greater detail on measurements and projections. The most significant findings from Working Group I include:

Increased certainty on humans’ role. (more) The AR4 stated it was “very likely” — a figure that corresponds to at least 90% certainty — that human greenhouse gas pollution has caused more than half of observed warming. Scientists are now more certain than ever that observed warming can be attributed primarily to human activities such as deforestation and greenhouse gas pollution. The AR5 states with 95% certainty that humans have caused more than half of observed warming since 1951. Furthermore, the estimate of the human component of warming has increased over time while the estimate of the influence of natural factors has decreased.

Ocean acidification. (more) The AR5 affirms that due to excess carbon dioxide in the atmosphere, the pH of seawater has decreased. This poses risks to the development of many shellfish and other forms of ocean life as well as to the humans who depend on oceans for their livelihood.

Widened sensitivity to CO2. (more) The climate’s sensitivity to CO2 is characterized in different ways. One key way is to describe how much the planet would warm if the amount of atmospheric CO2 doubled. AR5 has expanded the range of possible values at the low end, from 2 – 4.5ºC to 1.5 – 4.5ºC. A lower sensitivity means it might take slightly longer before the worst impacts take place, but emissions reductions will still be necessary to prevent severe climate change impacts.

Short-term slowing of surface warming. (more) The AR5 mentions a reduced rate of surface warming over the past 15 years. Possible causes include emission of light-blocking aerosols by developing countries as well as the redirection of heat to the deep ocean. Research indicates that total global heat content is rising without pause, though, and surface warming is likely to resume when the ocean heat cycles back into the atmosphere.

These updates add to many of the conclusions that remain unchanged from the AR4, including the target of restricting warming to less than 2ºC. Projections show that this target is within reach, but only if world leaders follow through on significant emissions cuts by 2050.

Scientists have become more certain of humans’ responsibility for climate change in each successive IPCC report. The AR4 stated it was “very likely” that human-generated greenhouse gas emissions caused more than half of observed warming, which they translated to at least 90% certainty. AR5 upped this confidence to 95%. New research indicates that since 1951, all of the observed warming may have come from human activities — even as natural forces and aerosols exerted a slight cooling influence

Santer et al., 2013: Human and natural influences on the changing thermal structure of the atmosphere. Proceedings of the National Academy of Sciences. DOI: 10.1073/pnas.1305332110

Skeptical Science
This site may be too technical for some but provides links to peer-reviewed studies as well as useful graphics and charts. The authors frame their articles as responses to common questions, such as Is the Sun causing global warming? They also summarize the overall evidence attributing global warming to humans.

Climate Reality Project
A useful resource for when the simplest possible explanation is needed.

Environmental Defense Fund
A straightforward summary of the relationship between CO2 and global warming with strong conclusions and good graphs and stats.

Union of Concerned Scientists
A more in-depth summary with peer-reviewed citations and internal cross-links to background information on other relevant topics. Includes an FAQ on aerosols and warming in addition to especially great graph showing the trajectories of different climate forcings.

Real Climate
A moderately technical explanation of how models are used to take known climate-influencing factors and estimate the contribution each one makes to global warming.

The rates of change attributed to several impacts have accelerated since AR4. For example, the melting of sea ice, glaciers, and ice sheets has accelerated, as has sea level rise.

The AR4 stated with “high” confidence that sea level rise is accelerating, and the AR5 adds detail to this statement.

National Snow & Ice Data Center
The National Snow & Ice Data Center provides a number of helpful resources, such as a quick fact sheet on ice sheets. The World Glacier Inventory is the most comprehensive data set on glaciers. They also offer up-to-date news and analysis on Arctic sea ice. They also offer a list of easy-to-use database for non-scientists, which contain links to a number of accessible datasets and a glossary of cryosphere terms.

NOAA
Tides & Currents page has a variety of resources, including a map depicting regional trends in sea level.

Climate Central
Surging Seas: Sea level rise analysis is a tool that lets the user see (at the state, city or zip code level) how much land and how many people will be impacted by various levels of sea level rise.

Union of Concerned Scientists
The group provides a large infographic on sea level rise and global warming as well as a short report on what the science says about causes of sea level rise.

The AR4 stated that the pH of seawater has decreased by 0.1 since the beginning of the industrial era. This may not seem like much, but the change corresponds to a 26% increase in the hydrogen ions that are the basis for determining pH, and it is enough to impede the development of some species of shellfish and corals. AR5 confirms this finding and adds new projections that show the increase of ocean acidification under differing emissions scenarios.

New Peer-Reviewed Literature on Ocean Acidification Since the WGI Deadline:

Oceana
Ocean-Based Food Security Threatened in a High CO2 World ranks nations based on the seafood security hardships they may experience by the middle of this century due to changing ocean conditions from climate change and ocean acidification.

Ocean Acidification: The Untold Stories illustrates how the changing acidity of the oceans threatens to throw off the delicate chemical balance marine life depends on for survival. It highlights the fact that although the attention that ocean acidification has received has focused mainly on corals, the impacts are going to be far-reaching throughout the oceans.

Acid Test: Can We Save Our Oceans from CO2? gives a general overview of the science behind ocean acidification, and focuses on how coral reefs will bear the brunt soonest.

Widened Range of Sensitivity to CO2

The climate’s sensitivity to CO2 is a way to describe how much the planet would warm if the amount of atmospheric CO2 doubled. A variety of studies have arrived at differing estimates on the exact CO2 sensitivity of the climate, so the AR4 gave a range of the most plausible values: 2 to 4.5ºC, with 3ºC deemed the most likely value.

The AR5 indicates that a sensitivity as low as 1.5ºC is possible, but this is a best-case scenario that appears no more likely than the high end, 4.5ºC. Furthermore, even the lowest sensitivity scenario doesn’t negate the need for emissions reductions. Current trends show that emissions are on track to increase far beyond doubling, which would create dangerous temperature rise even in a low-sensitivity climate.

Climate Nexus
This FAQ on climate sensitivity explains the significance of the number, as well as why low sensitivity values do not refute the need for greenhouse gas reduction.

Carbon Brief
This blog post lays out a brief comparison between different ways of estimating sensitivity and explains common misinterpretations by the media. Another post reiterates this summary and provides a good graphic to show the convergence of many recent estimates of the sensitivity range.

Skeptical Science
A series of graphics illustrates the many different estimates of climate sensitivity ranges that have been published over the years and shows how they’ve remained in a similar range since early estimates in the 1970s.

In another post on the Guardian’s 97% blog, Dana Nucitelli of Skeptical Science explains the basics of climate sensitivity and the various feedbacks that affect estimates.

Real Climate
This post provides a more scientific explanation of climate sensitivity that goes into detail about the various methodologies used to calculate estimates as well as provides links to recent papers.

The AR5 mentioned a reduced rate of surface warming over the past decade. Aerosols are known to exert a cooling influence on the climate, and some developing countries such as China are increasing their aerosol emissions as their industrial output rises. Volcanoes also emit cooling aerosols.

Another possible factor slowing the surface warming is the redirection of heat into the deep ocean. Historically, the deepest reaches of the ocean have been difficult to measure, but new research techniques show that heat in the deep ocean is increasing. This warming is likely to be released back to the surface as natural ocean cycles continue.

Many interactions between natural and human-caused factors have caused the rate of surface warming to rise and fall several times over the past century, so the present period is consistent with a warming world overall.

What the AR5 says:

“The observed reduction in surface warming trend over the period 1998-2012 as compared to the period 1951-2012, is due in roughly equal measure to a reduced trend in radiative forcing and a cooling contribution from internal variability, which includes a possible redistribution of heat within the ocean (medium confidence). The reduced trend in radiative forcing is primarily due to volcanic eruptions and the timing of the downward phase of the 11-year solar cycle. However, there is low confidence in quantifying the role of changes in radiative forcing in causing the reduced warming trend.” (SPM-10)

“There is medium confidence that internal decadal variability causes to a substantial degree the difference between observations and the simulations; the latter are not expected to reproduce the timing of internal variability.” (SPM-10)

“Warming will continue to exhibit interannual-to-decadal variability and will not be regionally uniform.” (SPM-15)

Cowtan and Way, 2013: Coverage bias in the HadCRUT4 temperature series and its impact on recent temperature trends. Quarterly Journal of the Royal Meteorological Society. DOI: 10.1002/qj.2297

Climate Nexus
This guide, with links to other explanatory material and peer-reviewed studies, shows how global warming is continuing despite the slowdown in warming of atmospheric surface temperatures.

Skeptical Science
This post has some great graphics showing the role of ocean heat in causing the apparent slowdown, as well as what temperature trends look like with the dampening impacts of natural variation removed. Another similar post adds a breakdown of many relevant forcings and notes whether they warm or cool the climate.

NASA
This article shows how natural variations have caused many so-called “pause” periods in atmospheric temperatures in the past, but show that warming has always resumed. The article also notes that accelerating sea level rise points to unabated warming in the oceans.

TeddyTV Norway
A clever video shows how variation can exist in the context of an overarching trend, using the metaphor of a dog owner walking a dog. Likewise, the historic progress of surface warming shows significant variation, while the overall trend is upward.

Tamino
A science blogger does a great post on how strategically choosing the segment of data to show has a large impact on whether a trend is apparent or not. This is an example of what is commonly criticized as “cherry-picking.”