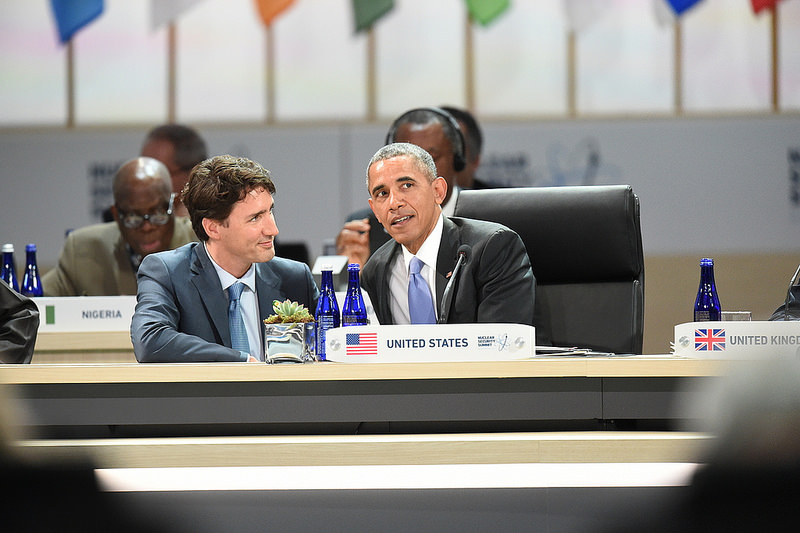 The US-Canada released a joint statement outlining Obama and Trudeau’s shared vision on climate policy. Here are some top takeaways:

It has been 19 years since the White House last hosted a Canadian prime minister. After years of conservative leadership in Ottawa, Prime Minister Justin Trudeau’s first visit to the White House represents a fresh start to Canada-U.S. relations, and an important step in the bilateral action on climate change that was all but impossible under Trudeau’s predecessor, Stephen Harper.

For more than a century, Canada and the United States have worked together to prevent and control pollution, as well as protect and restore many ecosystems shared by both countries. Environment and Climate Change Canada and the U.S. EPA meet twice a year to discuss ongoing environmental issues.

In 2014, Quebec joined California’s carbon market, followed by Ontario in 2015, all as part of the Western Climate Initiative. The state and provinces will work together to reduce carbon emissions and slow the rate of climate change. Greenhouse gas emission allowances were auctioned in 2015 at a minimum price of $15.84 a ton, and are expected to rise above $20 by 2020.

Commissioned in 2010, the Keystone is a 1,179-mile oil pipeline that would transport petroleum from Alberta, Canada to refineries in Illinois and Texas. When President Obama rejected the proposal in 2015, it became a symbolic step for strengthening the environmental cooperation between Canada and the U.S.

The Canada-U.S. Air Quality Agreement addresses transboundary air pollution, which is an issue that arises when airborne pollutants affect air quality many miles away. The Acid Rain Annex of the agreement established emissions reductions of SO2 and NOx, the primary causes of acid rain. The Ozone Annex, added to the agreement in 2000, addresses transboundary O3 by establishing emissions reductions of NOx and VOCs. The progress so far includes: 58 and 78 percent reductions of SO2 in Canada and the United States, respectively, between 1990 and 2012; and cuts to NOx emissions of 45 percent in Canada and 47 percent in the United States between 2000 and 2012.

The Canada-U.S. Arctic Treaty encourages cooperation between the two countries regarding the Northwest Passage. It states that, “all navigation by U.S. icebreakers within waters Canada claims as internal will be undertaken with the consent of the Canadian government.” However,  the eight nations of the Arctic Council, including U.S. and Canada, are continually entangled in unresolved and contentious boundary disputes.

The Great Lakes Water Quality Management is a commitment to protect and restore the waters of the Great Lakes between Canada and U.S. The agreement was most recently updated in 2012, with provisions that tackle aquatic invasive species, habitat degradation, harmful algae, toxic chemicals, discharge from vessels, and the effects of climate change.

Canada and U.S. created the world’s first international peace park to show symbol of peace and goodness, as well as to “represent cooperation in a world of shared resources.”

The Boundary Waters Treaty states that neither country should cause water pollution, which will cause health or property damage in the other country. These waters include: watersheds, migratory fisheries, and their habitats. The treaty also established the International Joint Commission (IJC), which implements the Boundary Waters Treaty and settles issues between the two countries.