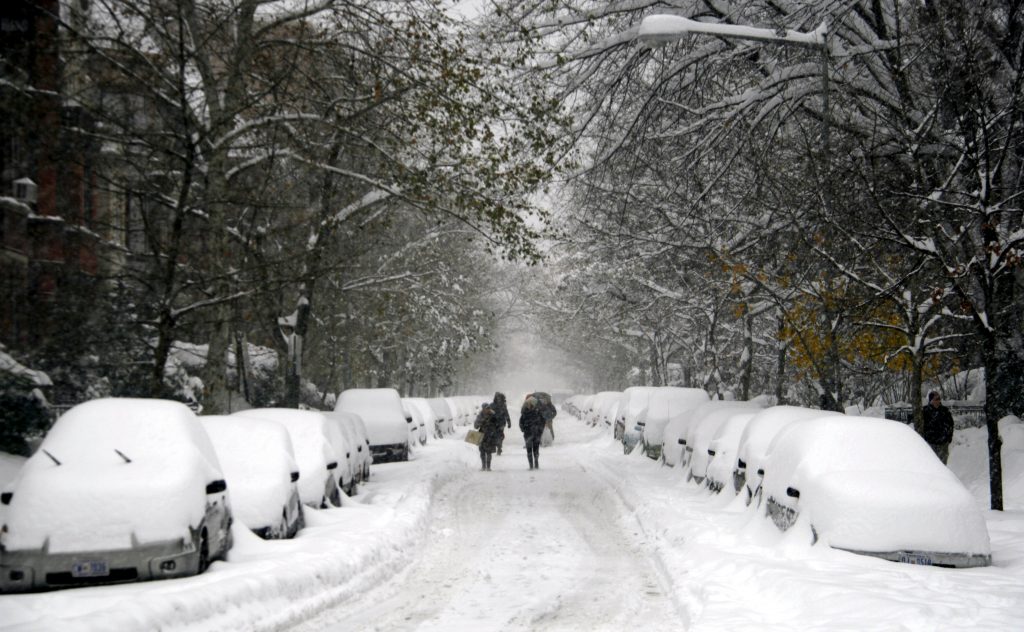 Mid-Atlantic sea surface temperatures are currently at a near-record high (at 5˚F to 7°F above average). NCAR scientist Kevin Trenberth attributes up to half of this extra heat to global warming. Extra heat in the ocean and atmosphere fuels storms with more energy and moisture. Global warming—working in tandem with large-scale patterns like El Niño and the warm phase of the Atlantic Multidecadal Oscillation—is linked to the warm ocean temperatures.

This storm is being compared to 2010’s “Snowmageddon,” which was also strengthened by warmer waters in the Atlantic (1.5°F/ 3°C) and high sea surface temperature (SST) anomalies in the Pacific, which modified the general flow of the of the atmosphere and affected weather conditions in many parts of the world.

Of the top 30 snowfall events, in the Washington DC and Baltimore area since 1880, 11 have occurred in just the last 15 years. NOAA scientists, examining 120 years of data, found that there were twice as many extreme regional snowstorms in the US between 1961 and 2010, compared to 1900 to 1960.

In addition, the unusually warm sea surface temperatures off the mid-Atlantic coast (see above) are helping to load this storm with extra moisture.

In the Washington, DC metro area, the most extreme events can have snowfall totals that nearly double the annual average of 14.5 inches of snow. The current storm is forecast to dump upwards of 30 inches of snow in the capital city. In 2010, Snowmageddon dropped 20 to 30 inches of snow throughout the area with some locations recording more than 3 feet of snow.

These events and trends are consistent with the findings of many leading climate change reports and organizations. The US National Climate Assessment shows that there has already been an increase in extreme precipitation in the Northeast, with precipitation rising by 71 percent between 1958 to 2012.

Projections from the UN Intergovernmental Panel on Climate Change (IPCC) indicate that precipitation in the Northeast will continue to increase. The IPCC explains how there will be “significant increases in either the frequency or intensity of heavy precipitation over the 20th century.” Its models show that some of the largest changes are expected to occur over North America, particularly during the winter. The increase in atmospheric moisture content explains most of the projected increase.

There are three primary contributors to elevated sea levels that increase coastal flooding risk: astronomical tide, storm surge and sea level rise. Due to climate change, the global ocean has already risen eight to ten inches over the last century as warmer ocean waters expand and ice sheets and glaciers melt. Storms often lead to record flooding events when the astronomical tide—a cyclical pattern of sea level rise and fall based on gravitational forces—combines with long-term sea level rise to raise sea levels to their highest. It is when storm surge—the rise of water and waves generated by a storm—rides atop these higher seas that storms often do the most damage.

In low-lying areas, a small increase in sea levels translates into much greater inundation as storm surge travels much further inland. In addition, even a small increase in surge can top coastal defenses, and disaster often strikes when thresholds are crossed. While climate change may be responsible for only part of any particular climate event, that change may be largely responsible for most of the damage in that event, such as when flooding defenses are breached.

New, more intense extremes can overwhelm and collapse existing human systems and structures. Human infrastructure and natural systems have developed to cope with a range of historical extremes, such as 100-year events, and they often collapse when events exceed this range. When storm surge rides on top of sea level rise and high tides, it can be responsible for a disproportionate amount of damage. Sea level rise and coastal storms have increased the risk of erosion, storm-surge damage, and flooding for many coastal communities, especially along the Atlantic seaboard.