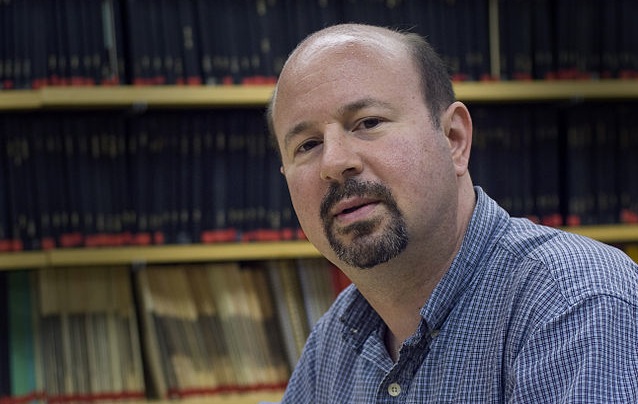 In what follows, we introduce you to one expert voice in the field of climate science, Michael Mann, who candidly discusses the scary reality that human greenhouse gas emissions are currently overcoming natural forcings. He also discusses the current confusion around surface warming, climate models, and natural variability, and warns against focusing on short-term effects that will be lost in the noise over longer time periods. Mann makes the important point that long-term trends, which matter most for policy and our future, are what models and scientists predict and understand best.
Climate Nexus: We now know that human influence has been a primary factor in warming since 1950. The IPCC is getting ready to confirm this with 95% certainty, and other studies have shown that humans may have caused even more warming than was actually observed (some of which was counteracted by natural factors). Given this, would you say that human influences have overpowered natural variability?

Dr. Mann: Yes. Natural factors such as volcanoes and reduced solar output should have led to a cooling trend in recent decades. If you talk to most scientists who work on this, they would tell you that more than 100% of warming is due to human activity.

Meaning, the climate should have cooled in the absence of human GHG emissions, so the fact that it warmed means that human influence was actually overcoming natural factors pushing it in the opposite direction.

Climate Nexus: So the climate should have cooled, but it hasn’t.

Dr. Mann: Yes- and not only has it not cooled, but warming hasn’t stopped. The last decade and last year are the warmest on record, and arctic sea ice is retreating far faster than any climate models predicted.  If anything it has accelerated over the last decade.

By many measures, whether you’re looking at Arctic sea ice, heat content of the ocean, global sea level rise, etc., climate change is proceeding either at or ahead of schedule relative to the model predictions.

Climate Nexus: How do climate models fit into this picture? They overestimated surface warming over the past 20 years, but when measured over the past century they remained on target. And they underestimated other trends, especially trends relating to impacts on the oceans.

Dr. Mann:  One of the shortcomings of current generation climate models is that there are some weaknesses in their ability to reproduce the complicated interaction between the ocean and the atmosphere in the tropical Pacific that governs El Nino. But if you look out over the next century, that effect will be way down in the noise, it will be irrelevant to what we are predicting will happen.

Again, take the oceans for example: a recent Nature article published after the IPCC report argues that slowing of warming appears to be tied to cooling almost exclusively in the tropical Pacific Ocean, that in turn is related to the prevalence of La Nina conditions in recent years. The authors argue that is just part of natural variability of the climate, a swing in the negative direction. In their interpretation, it will soon enough swing in the other direction as part of a natural oscillation. If that’s true, then that regional cooling is not a valid argument for downgrading climate sensitivity, or downgrading future projections.

Climate Nexus: For now, then, more heat seems to be going into the oceans than we expected.

Dr. Mann: Yes, and some people would say that it’s a good thing that the heat is getting buried. But when you heat ocean water, it expands. If we are heating the deep ocean faster than we projected, it actually means that sea level rise is going to proceed faster than projected. That increased sea level rise does indeed appear to be happening.

Now, it’s true that we still need to improve our measuring platform to determine the heat flux into the ocean. But the satellite measurements that look at how much energy is coming in and out tell us that there is a growing imbalance. There’s more energy coming in than is going out.  We know the climate system is heating up. The challenge is to figure out precisely where some of the heat that we don’t see at the surface is getting buried, and many of the signs that we’ve discussed show that the ocean is a part of that.

Climate Nexus: And what about other factors influencing warming rates, for example volcanoes?

Dr. Mann: We are also underestimating low-level volcanic activity. Not huge eruptions, but background events. They contribute to net radiative forcing, and that can easily account for the slowing of warming that the IPCC simulations don’t account for. Combine this phenomenon with tropical Pacific heat burial mechanism, and we have more than enough natural explanations for what has happened.

Climate Nexus: Some have implied that scientists are completely baffled by the change in surface warming rates and the divergence from the models, but it sounds like there’s a pretty solid understanding out there of the forces in play.

Dr. Mann: The problem isn’t that we don’t have mechanisms to explain the apparent slowdown in surface warming. We know of several: natural cooling due to tropical Pacific ocean atmosphere dynamics, La Nina, and the role of low-level volcanic activity. It is going to take some work to figure out the precise role of each of them, but any one of them could explain it. We are still improving our measuring systems, making progress and we will get there.