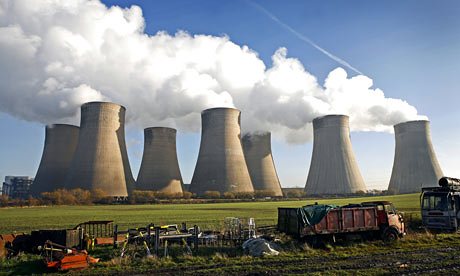 Cap and trade is a market-based approach to lowering greenhouse gas emissions from fossil fuel-burning power plants, which are the main cause of manmade climate change. Also called emissions trading, cap and trade programs use economic incentives and a market for trading carbon credits to achieve emissions reductions. Air pollution, often referred to as an economic “externality,” imposes steep costs to people’s health and creates costly climate impacts. Cap and trade is a system to limit pollution by making polluters pay more for damaging the environment, and to create financial incentives for companies to cut emissions.

There are two basic elements to a cap and trade system. A central authority creates the “cap” by putting a limit on the total amount of air pollution that members of the trading bloc are allowed to emit. The authority sells or auctions emissions permits to companies that give them a right to emit or which they can trade depending on how easy it is for them to reduce their pollution. The authority eventually lowers the cap to reduce the overall emissions within the market, thus driving innovation for technologies that reduce emissions and increasing the attractiveness of renewables.

The ability for companies to “trade” permits between themselves creates market flexibility where firms pay more to pollute, and thus have an incentive to reduce their emissions. Companies that are good at cutting emissions and are already under the cap can sell their permits and thus get a reward for operating efficiently and polluting less. Companies can therefore turn their carbon pollution cuts into revenue. Government revenue generated by permit auctions can also be used to finance clean energy development that serves to further reduce emissions and transition away from fossil fuel energy.

There are numerous examples of successful cap and trade programs in the recent past. The Acid Rain Program, established in 1990 as part of an amendment to the Clean Air Act, mandated major emissions cuts of sulfur dioxide and nitrogen oxides from coal-fired power plants. Both of these compounds are abundant in coal and are the primary cause of acid rain. The Acid Rain Program was the first national cap and trade program in the United States, and cut sulfur dioxide emissions in half at a fraction of the expected cost. In 1998, the Environmental Protection Agency also successfully implemented a cap and trade system to mitigate significant transport of nitrogen oxides, one of the precursors of ozone.

Today the United States and many other countries and regions around the world have effective carbon trading markets that build from these previous examples, yet are much larger in scale due to the sheer size of the power sector and its vast amount of carbon emissions. The two largest emissions trading programs in the United States are the Regional Greenhouse Gas Initiative (RGGI) in the Northeast and California’s AB-32 program.

The Regional Greenhouse Gas Initiative—widely known as “Reggie”—is the first market-based emissions trading program in the United States. It has reduced a significant amount of greenhouse gas emissions and spurred renewable energy investment. RGGI is a cooperative effort among the states of Connecticut, Delaware, Maine, Maryland, Massachusetts, New Hampshire, New York, Rhode Island, and Vermont to cap and reduce carbon emissions from the power sector.

Member states sell nearly all emissions permits through monthly auctions and invest the proceeds in energy efficiency, renewable energy, and other consumer benefit programs. These programs are already driving innovation in the clean energy economy and creating green jobs in the RGGI states. RGGI may also serve as a model for new regional cap and trade programs that other states are likely to establish under the Environmental Protection Agency’s new Clean Power Plan.

California established the AB 32 Scoping Plan as one of its main strategies to reduce the greenhouse gas (GHG) emissions and ramp up clean energy. This cap and trade program will help put California on the path to meet its goal of reducing emissions to 1990 levels by the year 2020, and ultimately achieving an 80 percent reduction from 1990 levels by 2050.

Similarly to RGGI in the Northeast, California sells a portion of the emissions permits at quarterly auctions and reserve sales. The Legislature and Governor use auction proceeds to finance projects that support the state’s long term climate and energy goals. These investments advance California’s goals by reducing GHG emissions, providing net GHG sequestration, and supporting the transformation under way to improve public and environmental health and to develop a clean energy economy.

Midwestern states like Iowa, Illinois, Minnesota and others are looking to RGGI and the California cap and trade program as potential templates for their own regional emissions trading program. As the Environmental Protection Agency implements the Clean Power Plan, states will have a choice for how to comply, either through more renewable energy capacity, cap and trade programs to cut emissions, or some combination of the two.

A coalition of power companies, regulators and green groups known as the Midwestern Power Sector Collaborative (MPSC) asked the Environmental Protection Agency to create ground rules for states that want to trade carbon emissions permits with other states, an option it feels would offer one of the cheapest options to meet the agency’s proposed Clean Power Plan.

Since 2007, China has been the world’s largest emitter of carbon dioxide, and it is projected to surpass the United States on a per capita basis by 2017. By 2030, Chinese annual carbon emissions are projected to reach approximately 11 billion metric tons—compared to about 36 billion worldwide in 2013. In light of China’s large contributing role and its potential vulnerability to climate change, the government considers mitigation a major component of its policy agenda in the 21st century.

China is currently implementing multiple regional cap and trade programs. In China’s 12th Five-Year Plan (2011-15), the Chinese government mandated the establishment of seven regional emissions trading programs in the cities of Beijing, Tianjin, Shanghai, Shenzhen, and Chongqing, as well as the provinces of Guangdong and Hubei. Most of the exchanges came online over the course of late 2013 and early 2014, with the final market coming into effect in Chongqing on June 19 of this year.

China recently announced plans for a national carbon permit trading program in 2017. President Xi Jinping made the announcement before a meeting with President Obama at the White House. The two leaders are spotlighting the determination of the world’s top two economies to curb emissions ahead of the international climate change accord in Paris in December.

Launched in 2005, the European Union’s Emissions Trading System (EU ETS) is one of Europe’s most important policy tools for reducing emissions and tackling climate change. The program has been an international cap and trade model, and is the successor to the UN’s Kyoto Protocol, agreed to in 1997 by member countries. In 2020, emissions from sectors covered by the EU ETS will be 21percent lower than in 2005. By 2030, the EU Commission proposes, they would be 43 percent lower. Within the cap, companies receive or buy emission allowances, which they can trade with one another as needed. They can also buy limited amounts of international credits from emission-saving projects around the world. The limit on the total number of allowances available ensures that they have a value.