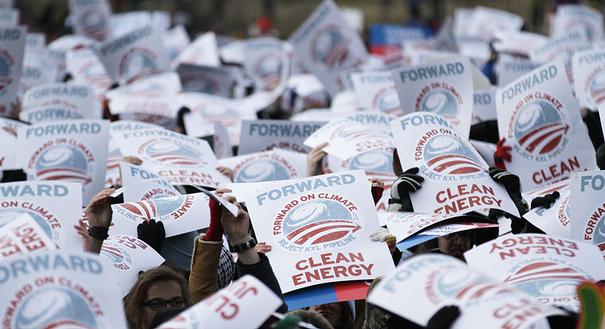 “The Obama administration’s detailed plan for reducing greenhouse gas emissions by more than a quarter over the next decade is achievable because cities and businesses are leading the way, and because the free market and community leaders are together speeding the transition from coal to cleaner energy. America is strongest when it leads by example, and while there is always more we can do, joining the 32 other nations that have submitted plans will help spur other nations to follow – and help build momentum for the U.N. conference in Paris.”

“We applaud the Obama Administration for following through on the ambitious commitment made last November with China by pledging clear, significant action to tackle the climate crisis and protect our children and grandchildren. We’ve seen the effects of unmitigated carbon pollution take their toll around the world, but this announcement is further proof that the U.S. is stepping up to lead the world in pursuing solutions.”

“[The US INDC] is a serious and achievable commitment. WRI research finds that under its existing federal authority, the United States can reach its proposed target to cut emissions 26 to 28 percent from 2005 levels by 2025. Going forward, additional opportunities for deeper reductions will be increasingly available as technology trends make clean power and other low-carbon solutions more affordable. The United States acknowledgement of the need for deep decarbonization sends a positive signal.”

“The higher end of the 2025 target is credible, comprehensive and highly achievable. It sets an example of leadership for other countries to follow, and moves the world closer to holding temperature rise to 2ºC to avoid catastrophic climate change. The U.S. target also sends a clear signal to the global investor community that the U.S. is committed to building a low carbon economy. It will stimulate business innovation and ingenuity and the necessary flow of capital from dirty fossil fuels to cleaner technologies.”

–       Mindy Lubber, President and director of the Investor Network on Climate Risk, Ceres

“Today’s announcement is a positive signal that shows the US’s intentions about strong climate action. We hope that other countries will put forward their best efforts so that they can also reap the financial rewards of low-carbon economic growth.”

–       Felipe Calderón, Chair of the Global Commission on the Economy and Climate

“The U.S. target will drive investment at home in efficiency and clean energy, and leverage those investments to promote stronger action globally. By stepping up early with an ambitious contribution, the U.S. is encouraging other countries to do their fair share, too. If China and the other major economies come through, we have a good shot at a meaningful agreement in Paris.”