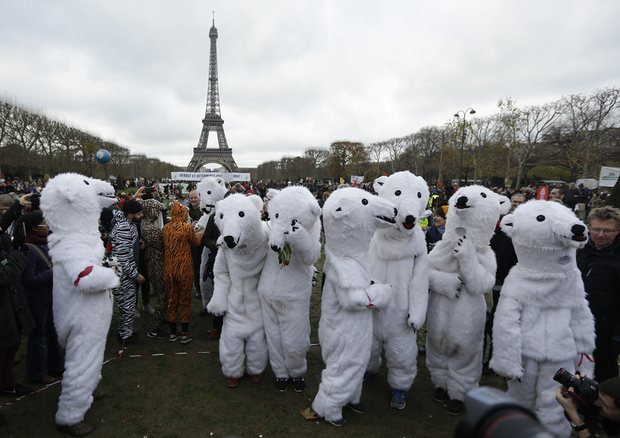 A key consideration in international climate negotiations is whether a global long-term goal (LTG) should be a feature of the Paris agreement.  Over 120 countries, numerous non-governmental organizations, and many corporate leaders have recently come out in support of an LTG.  However, a wide–range of LTGs have been proposed, and there is a range of opinion about the suitability of including an LTG in the Paris Agreement.

Though most LTGs drive in the same direction, their forms are very different and comparisons are complex.  This backgrounder sets out the different types of goals, their basic elements, and the rationale for a new LTG.

The Rationale for an LTG

The precedent for an LTG already exists on the global stage, as leaders have previously committed to two long–term principles – stabilizing greenhouse gas concentrations at a level that would prevent dangerous climate change, and limiting global warming to 2º Celsius (C) – the former specified in Article 2 of the United Nations Framework Convention on Climate Change and the latter set out in the Copenhagen Accord.

Supporters of a more concrete, time and target–bound LTG argue that the 2°C principle implies a dramatic sea change in the direction of investment and policy–making. As such, they ague that decision makers and investors need a clear, actionable long-term policy signal to provide the confidence and predictability that will facilitate meaningful and sustained action on climate.

A new, more specific yardstick is needed because public and private investors do not measure their actions in terms of global temperature or greenhouse gas (GHG) concentrations. For decision–makers confronted with the challenge of translating a global goal into concrete actions on the ground, annual pollution emissions or renewable energy production targets serve as more useful and operationally–relevant metrics.

There are myriad ways that a greater degree of specificity can be obtained – via time constraints, development and implementation of solutions and emissions reduction targets – and, myriad opinions exist concerning the best mix of these factors, the target limit of warming, and whether the same LTG should be applied to all countries.

Carbon Budget:  This type of goal usually sets out a global budget for the cumulative total emissions of all countries over a long period; say 2015-2100.  Most often this goal applies only to carbon dioxide (CO2), but is sometimes applied to all GHGs.

Emission Reduction: This kind of goal usually establishes a target (often zero) for GHG emissions within a specified timeframe.  However, it could also call for emissions to fall below the expected business-as-usual path, or “deviation from BAU,” and could identify a particular year by which total emissions must peak and begin to fall.

Transformation: These goals establish a target for transforming a sector that produces GHG emissions, converting the energy sector to renewable energy, for example.

Other: LTGs have also been suggested to address issues like finance and adaptation.  Both of these subjects are likely to be major components of a Paris agreement.

The Scientific Drivers that Shape the Environment of the LTGs

Because temperature rise due to CO2 emissions is essentially permanent, halting warming requires that CO2 emissions must eventually go to zero.

An alternative to reducing emissions to zero is to remove CO2 from the atmosphere (negative emissions), a controversial practice involving largely experimental technology, massive continent-scale land use, and high costs. Negative emissions are included or implied in many LTG proposals.

The Intergovernmental Panel on Climate Change (IPCC) assessed many pathways that imply LTGs as part of its 5th Assessment Report (AR5) cycle, noting in its final Synthesis report: “There are multiple mitigation pathways that are likely to limit warming to below 2°C relative to pre-industrial levels. These pathways would require substantial emissions reductions over the next few decades and near zero emissions of CO2 and other long-lived GHGs by the end of the century.” The Synthesis report also noted that pathways in which warming is limited to below 2°C are characterized by  “40% to 70% global anthropogenic GHG emissions reductions by 2050 compared to 2010, and emissions levels near zero or below in 2100.”  Pathways that limit warming below 2°C without incurring significant net negative emissions are characterized by emissions reductions of 49% to 72% by 2050 compared to 2010, according to the IPCC Working III report, Chapter 6.

Common Parameters on which LTGs Differ

“Zero emission” goals generally call for all emissions to fall to zero by a certain date. They typically do not allow for significant negative emission practices until after emissions are reduced to zero. Strict zero emission goals do not permit negative emissions, and require more rapid emission reductions in the near term to hold warming below 2°C.  Zero emissions goals do not necessarily exclude the capture, sequestration, and storage (CCS) of fossil fuel emissions, and would therefore permit continued use of fossil fuels.  [Note: current CCS technology does not capture all emissions, but it is theoretically possible. As such the application of CCS fits under the vision of many, but not all, “zero emissions” goals].

“Net zero” goals require that the balance of carbon emissions in the atmosphere be brought to zero, and can allow for negative emissions in order to secure that result.  These goals call for emissions to reduce to zero by a certain date.

Emission reduction pathways that do not rely upon negative emissions generally require steeper near-term reductions as well as deeper reductions by 2050: 49% to 72% by 2050 compared to 2100. Long-term goals with less ambitious 2050 targets imply negative emissions.  In general across all pathways, the electric sector is decarbonized by 2050.

Timetables for various LTGs have been distilled in this info sheet.

Greenhouse gases (GHGs) are the primary driver of man–made global warming. The term “GHG emissions ” refers to a large collection of GHGs that include CO2, methane, and many others. CO2 is the main concern, owing to its massive production and the essentially permanent warming it causes.  Methane is another GHG, more potent than CO2 but the warming it causes fades quickly.  Sometimes methane and CO2 are lumped together as “carbon emissions,” but at other times “carbon emissions” refers only to CO2.

A rigorous budget can be calculated for CO2, but due to the way other greenhouse gases interact with the climate system, the same cannot be said for them.  It is not an absolute requirement that the emissions of the other GHGs go to zero because their warming effect does not accumulate like CO2, but budgets and dates for zero emissions are often calculated and provided in terms of all GHGs in order to provide simplicity for policy makers.

Desire for a strong likelihood requires stricter goals. Given the range of opinion about acceptable risk, a range of emission goals with different likelihoods may be expressed for any one particular level of warming.

A growing collection of countries, cities, companies and other sub and multi-national actors are championing the creation and adoption of an LTG.

More than 120 countries have expressed support for an LTG, including:

Beyond country-level support for the idea of an LTG, an increasing array of cities and companies are going on the record in support of net-zero and other goals. Many are shifting their internal operations to align with net-zero or significant emissions reduction targets, and are calling on national actors to endorse a global net zero goal in international climate negotiations. 159 companies have signed a petition called the Trillion Tonne Communiqué petitioning countries to cement a timeline for achieving net zero emissions globally by the end of the century.  Some signatories of the communiqué have gone further and established a campaign for achieving net zero emissions by the year 2050, including the Richard Branson-led B Team group.

There are currently two options for LTG language presented in the preamble of the negotiating text on page 3, each offering a different timeline for emissions reductions.  The first of these options aims to achieve near net zero emissions by 2100, while the second endorses a more ambitious plan to cut emissions substantially by 2050 and achieve zero emissions within the second half of the century. There are approximately 26 places in the Paris negotiating text (as approved in Geneva) where LTGs are discussed. These proposals range from the broad and briefly stated to the substantive and precisely articulated, and differ on the level of ambition that would be required to meet them. In advance of and during the COP21 meetings in Paris these options will be whittled down or eliminated completely. A full list of them can be found here.

LTGs also make an appearance in the general objectives section of the negotiating text.  Three distinct options have been suggested, each with several subsidiary components that offer further options. The first proposal (paragraph 5, option 1, subsection 5.1 on page 5 and 6) is the most ambitious, containing subsidiary proposals that scale in their ambition from attaining near net-zero global emissions by 2100, to attaining near net-zero emissions by 2050 and enacting negative emissions before 2080. Options 2 and 3 contain progressively more modest and vague language, pushing for developing countries to be allotted a longer time frame in which to reach their peak emissions.

LTG possibilities integrated into the negotiating text’s general objectives are reiterated and fleshed out in the text’s section on mitigation. Roughly four configurations are under consideration in this section, each partially matching and expanding upon what is currently stated in the general objectives section of the text.  They range from a target of near- or net-zero emissions by 2100 or during the period of 2060-2080, to enacting cuts to reach net zero emissions by 2050 that would only require action from developed nations.  In Option 1a of paragraph 17.2 in section D on page 9 of the text a particularly comprehensive formulation of the LTGs is articulated that would require universal although differentiated actions from all countries.

Beyond mitigation LTGs sections E and G – on Adaptation and Finance respectively – also contain suggestions for LTGs to guide behavior on these issues. Proposed adaptation goals range from ‘no adaptation goal’ (section E, paragraph 50.4, option 6 on page 21 of the text) to any of 10 other alternatives, which suggest establishing a goal and setting a road map for financing that goal as in options 10 and 13 of paragraph 50.4 on page 21 and 22 of the draft agreement.  In the finance portion of the text there are relatively few articulations of a set money amount that is aimed for by a certain future date.  Most of the variations in the goals currently under consideration are on how to divide the burden sharing. These range from mandating that a certain percentage of the Gross National Product of developed countries be set as an annual contribution to the Green Climate Fund with a review process every five years, to establishing clear burden-sharing arrangements for financing mitigation and adaptation actions.

All mentions of LTGs in the draft agreement have been distilled in a table downloadable here.