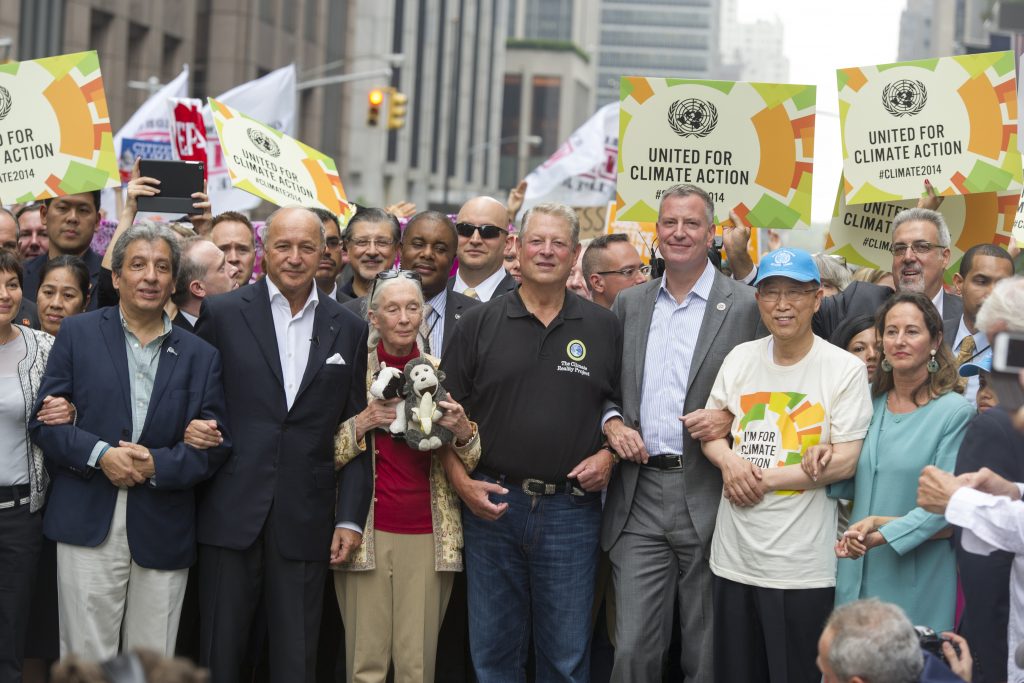 2014 has seen unprecedented heat and experienced devastating extreme weather events, some of which have already been linked to climate change.

2014 also witnessed an unprecedented level of support for climate action, from people on the streets demanding change to heads of state reaching record accords.

These major climate actions come at a critical time.

With 2014 coming to a close, weather organizations and independent researchers have crunched the numbers and found that 2014 will almost certainly go down in history as the hottest year on record. Global land and sea surface temperatures for the year-to-date have already broken records, and December is seeing above-average temperatures as well.

2014 marks only the latest in a string of years with record-breaking heat, however. It has been 358 months since we had a cooler-than-average month, and the fifteen hottest years on record have all come since 1997.

Assuming current trends hold throughout the last week of this month, 2014 has set a new global temperature record despite the fact that it is also an El Niño Southern Oscillation (ENSO)-neutral year.

For more on the science behind 2014’s record-breaking heat and extreme weather events, please see explanation and FAQs below.

This year is now all-but-certain to be the hottest ever recorded across the globe as human-caused global warming continues to turn up the heat. 2014 is not only the hottest year, but also the latest in a string of years witnessing record-breaking heat. What’s especially remarkable about 2014, however, is that natural variables indicate this year should not have been so hot. Here is a clear look at 2014’s record-setting temperature and how this fits in with long-term warming trends.

2014 is more than a new record hot year; it is part of a string of recent heat records.

There has been a continuous streak of 358 months breaking the 20th century average; the hottest 15 years ever recorded have come since 1997; and the hottest decade so far ended in 2010, the third decade in a row to break the record for global temperatures.

Recent research indicates that cooling cycles, due to back-to-back La Niña events during 2010-2011 and 2011-2012, may have worked to sequester heat in the deep ocean, keeping surface temperatures cool. What’s more, there is a recurring cycle of reduced solar activity, known as a deep solar minimum, which results in less heat reaching the Earth.

What makes 2014 especially remarkable is that it set a new global temperature record during an El Niño Southern Oscillation (ENSO)-neutral year. ENSO is an important natural cycle for global temperature because it can bump temperatures up or down for one or several years at a time.

Prior to 2014, the years 2010 and 2005 were tied for the hottest year on record, both of which were El Niño years. It’s also worth noting that an especially strong El Niño occurred during 1997 and 1998, the two earliest years included among NOAA’s top 15 hottest years on record.

The fact that 2014 set the new global temperature record in an ENSO-neutral year, besting recent hot El Niño years, implies that the amount of warming due to human activity is enough to trump the natural year-to-year variation associated with the ENSO cycle.

Surface temperatures are setting records, but the biggest global warming story is taking place in the deep ocean, which has stored an enormous amount of heat in recent years.

While land and sea surface temperatures have continued to warm, deep ocean temperatures in particular have skyrocketed, with the ocean taking up a larger than normal share—over 90 percent—of the overall heat stored by the planet.

This heat is expected to cycle back into the surface and drive atmospheric temperature even higher. A study analyzing the record ocean surface warming in 2014 finds that unusually warm surface temperatures in the North Pacific were largely responsible. While it is still too soon to know for sure, this could indicate the start of a trend where the massive amount of heat being absorbed by the ocean is making its way to the surface and getting reflected in surface temperatures.

A: 2010 was the prior record holder for hottest year, and 2005 was the record holder before that. There are 3 major temperature datasets used for calculating the global record, and in only one of these, the HadCRUT database, is 1998 declared the warmest year. This makes sense because among the three datasets the HadCRUT database has the weakest coverage of the Arctic region where warming has been accelerating the fastest (as predicted by global warming models and as documented yet again in the just-released Arctic Report from NOAA).

It’s worth noting that 1998 was witness to one of the strongest El Niño events ever on record, an event in which heat cycles up from the deep ocean, warms surface temperatures and the atmosphere before cycling back down in a La Niña year. There was no such El Niño event in 2014, making the 2014 record all the more notable for occurring in a year in which heat failed to cycle up from the ocean in an El Niño event.

Q: “Even though 2014 is a little hotter, isn’t the overall warming rate still much lower than before?”

A: The long-term rate of warming has not changed. Due to natural variability (i.e. heat shuttling back and forth between the ocean and the atmosphere), the short-term trend goes up and down. What is truly remarkable about the 2014 record is that it occurred during a period in which there was no El Niño event shuttling heat up into the surface and after a period of an extended solar minimum, which exerted a cooling influence.