A Summary of Expert Analyses

The Obama administration’s decision on whether to approve construction of the Keystone XL pipeline will affect the United States’ climate and energy future. In June, President Obama said he would only approve the pipeline if experts can show it would not increase overall emissions and exacerbate climate change. This condition has prompted pipeline supporters to argue that the low price of Canadian oil provides a strong incentive to use trucks and trains to get the oil to market regardless of the pipeline’s approval. If exports by truck and rail would equal those of the pipeline, it would mean the pipeline would not increase net carbon emissions and could reasonably be approved according to President Obama’s terms.

However, independent analyses by neutral, respected organizations like the US Energy Information Administration (EIA), Royal Bank of Canada (RBC), Goldman Sachs, and more show that these supporters’ claims are not consistent with long-term oil production forecasts. Keystone XL is not only the preferred mode of oil-sands transportation, it is necessary for Canadian oil producers to export at full capacity. If built, the Keystone XL pipeline would have a more extreme impact on our climate than if the Obama administration rejected the plans. The Keystone XL pipeline would unleash the vast supply of Canadian crudes, setting a precedent for future production, and would cement infrastructure that renews North American reliance on increasingly dirty and dangerous fossil fuels.

These complex, long-term and systemic impacts are especially important considering President Obama’s expressed concern with acting in the best interest of the United States. During his speech at Georgetown University on June 25, 2013, President Obama states: “I do want to be clear. Allowing the Keystone pipeline to be built requires a finding that doing so would be in our nation’s interest. And our national interest will be served only if this project does not significantly exacerbate the problem of carbon pollution. The net effects of the pipeline’s impact on our climate will be absolutely critical to determining whether this project is allowed to go forward.” However, determining the pipeline’s net impact is no easy task; it requires that industry and economic experts evaluate how oil-sands development would hypothetically proceed in the absence of Keystone XL.

Some experts in the industry who support the pipeline have pointed to the recent surge in crude-by-rail transport to argue that similar emissions levels would result with or without the pipeline and that Keystone XL is the safest and most efficient means of transport. Crude-by-rail transport has clearly seen dramatic increases in recent months as the Obama administration deliberates on whether to approve the pipeline. Amid the uncertainty, producers have gone ahead and employed workarounds, using barges, trucks, and in particular railways to bring the Canadian oil sands to market (Figure 4.2). This is because, with the steep discount rates on Canadian oil, it pays to get the oil to international markets where it can compete with international prices.

A recent Goldman Sachs investment report shows that at $71 per barrel in 2013, Western Canada Select (WCS), an oil-sands product, is $22 cheaper than West Texas Intermediate (WTI) in the United States and $34 dollars cheaper than European Brent. According to Craig Pirrong, a professor of finance at the University of Houston, “The discount on western Canadian oil is more than enough to compensate for the higher cost of unconventional transport. Take trains, for example: it costs an additional $5 to $10 per barrel over the $7 to $8 toll a pipeline would charge, according to various estimates, but that’s far less than the current discount on our oil.” (To compare the price per barrel of different shipping methods, see the table on page 4 of the Carbon Tracker Initiative’s Keystone XL Pipeline report. For alternative cost estimates see: Reuters, CNBC, Bloomberg).

Price differentials underpin claims that Keystone XL would not impact carbon emissions. So long as large price differentials remain between Canadian oil sands and comparable crudes, Canadian producers will use rail transport to limit losses, and United States refiners to strike a bargain. Moreover, limiting oil transport infrastructure will cause the price differentials to increase. If the Obama administration rejects the plans to construct Keystone XL, Goldman Sachsestimates WCS would lower to $50 a barrel in 2014 and $58 in 2015—encouraging more producers and refiners to find alternative means of transport.

However, increased price differentials can only incentivize increased crude-by-rail transport to a point. Like pipelines, crude-by-rail infrastructure will face supply side bottlenecks that restrict oil-sands development. The risks associated with limited export infrastructure puts into question the economic viability of oil sands production, making stakeholders reluctant to invest, and many experts already suggest that rail transit is nearing capacity.

The Keystone XL pipeline would open up this bottleneck in rail capacity, allowing thousands more barrels of oil sands to go to market each day. This is the ultimate purpose of the pipeline. Opening the bottleneck would enable offshore shipment of WCS through the Gulf that could compete with Brent crude, giving WCS oil a lift against its American and European counterpoints. If constructed, the pipeline would add 830,000 barrels a day of transport capacity, a substantial increase from the 390,000 barrels Canada produced in 2005 and a nearly 20% increase in volume from the estimated 700,000 barrels of 2016 crude-by-rail capacity. 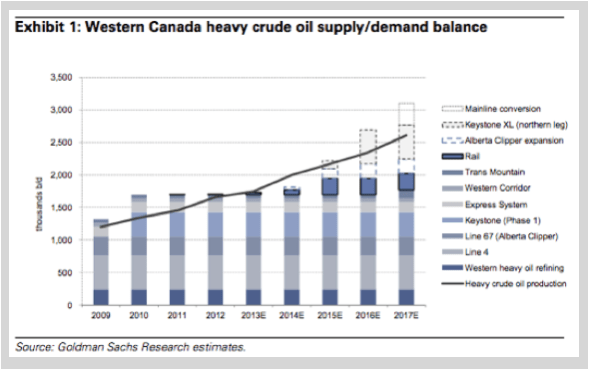 Moving forward, the Royal Bank of Canada (RBC)—a major investor and analyst of the oil sands industry—expects Canadian oil production to increase to 1.2 – 1.4 million barrels by 2017, a 100% increase above estimated 2016 rail capacity. By 2030, the Canadian Association of Petroleum Producers’ forecasts the target level for oil production to be7.8 million. With these aggressive oil production goals, experts have concluded that the XL pipeline is critical to Canada’s ability to fully tap its vast supplies of landlocked Alberta crude oils.

Goldman Sachs reports: “TransCanada’s proposed Keystone XL pipeline from Hardisty, Alberta to Port Arthur and Houston, Texas is the most meaningful of the future planned projects and one that is especially important in both ensuring adequate takeaway capacity from Canada but also direct access to significant heavy crude oil demand in the US Gulf Coast.”

A January 2013 RBC report states that while larger price differences provide increased incentive to bring Canadian oil to market, and while some transport systems are already in place, “A key risk to this outlook is that the Keystone XL pipeline is not approved or is significantly delayed. Such could cause a rethink of current oil sands production/ expansion plans.”

RBC goes on to say in a February 2013 energy report: “Should Keystone XL not move ahead, oil sands projects slated for start-up in the 2014-16 timeframe are likely to proceed at a much slower pace or be deferred” (Exhibit 5).

Canada’s oil sands are among the dirtiest of fossil fuels and could have potentially devastating impacts on our climate system. Experts agree that oil producers and refiners will export some of Canada’s oil sands by rail regardless of President Obama’s decision on whether to approve the Keystone XL pipeline. But experts also agree that rail transit will not be able to fully compensate for the sheer export volume that the pipeline would enable, and that pipelines are critical to the long-term development of Canada’s vast crude oil supplies.

These findings show that full exploitation of Canada’s oil sands facilitated by the Keystone XL pipeline is not in the US national interest. It would increase net output of carbon pollution over the upcoming decades and exacerbate the risks of climate disruption that threaten our economic and social systems.