While global temperatures are shaping up to make 2014 the hottest year on record, the U.S. has endured over a week of unseasonably wintry conditions due to atmospheric blocking – a large scale pressure pattern with little or no movement – that has led to a sustained outbreak of record cold mid-November Arctic air. The most eye-opening consequence of the cold streak has been the extreme amount of snowfall – made worse by lake-effect snow – in Buffalo, New York. According to the U.S. National Climate Assessment, climate change has already led to heavier-than-normal snowfalls in the Northeast with indications that wintertime atmospheric patterns are increasingly prone to blocking, or stagnation that locks in wintry conditions.

So how might the current Arctic outbreak and extreme lake-effect snowfall in Buffalo be connected to broader climate change trends?

Like the polar vortex of winter 2013-2014, the current Arctic air outbreak and extreme amount of lake-effect snowfall in Buffalo was triggered by a high-pressure system in the Pacific Ocean and western U.S. that has led to an extreme, southward sinking jet stream and atmospheric blocking. While the sinking of the jet stream this past week was fueled in part by the strong extra-tropical remnant of Typhoon Nuri, scientists have observed an unusual number of extreme jet stream patterns like this in recent years and are advancing two main theories that might help to explain why. One prominent theory links the unusual jet stream behavior to Arctic amplification, or enhanced warming in high northern latitudes relative to the northern hemisphere. The second leading theory suggests unusual atmospheric patterns may be tied to increased water temperatures in the Pacific Ocean. This latter theory, in addition to helping to explain unusual jet stream patterns, may also explain Typhoon Nuri’s intensity.

The next two sections highlight these theories in more depth before discussing how unusual jet stream patterns are linked to extreme lake-effect snowfall.

Some scientific research indicates a warmer ocean can make tropical storms more intense, which can drive big dips in the jet stream. The research of Dr. Kevin Trenberth and his team, for example, connects the Pacific Ocean’s influence on the atmosphere to many of the regional atmospheric anomalies we’ve seen in the United States like the drought in California. The Arctic outbreak this week is connected to atmospheric conditions over the Pacific Ocean. This is because the extreme jet stream pattern was due, in part, to the influence of Super Typhoon Nuri, which was the second most intense tropical cyclone worldwide in 2014. Once Typhoon Nuri moved to higher latitudes and transformed into an extra-tropical cyclone, it gained force and became the most powerful storm to ever move over the Bering Sea in recorded history. The system led to a large-scale pressure pattern and caused the jet stream to sink southward bringing Arctic condition to the United States.

According to Dr. Trenberth, the events “started with exceptionally warm sea temperatures in the Pacific that led to the super Typhoon Nuri.” He goes on to say, “The oceans are warmer and there is five percent more moisture in the air over the oceans than prior to 1970…and the extra moisture fuels storms like Haiyan and Nuri and indeed adds a bit more volatility to the weather.”

Other scientists have linked unusual jet stream behavior to Arctic amplification. The Arctic has warmed approximately twice as rapidly relative to the entire northern hemisphere, and the extra solar energy absorbed during summer is released to the atmosphere as heat during the fall. Scientists are actively investigating how this impacts large-scale atmospheric circulation. Jennifer Francis has theorized that Arctic warming causes jet streams to weaken and to have larger north-south waves. When these waves get larger, they move more slowly. The slowing of those waves can cause weather systems to move more slowly, and even become stuck in place. This in turn increases the likelihood of disasters caused by persistent weather conditions, including droughts, heat waves, floods, long cold spells, and heavy snows.

While lake-effect snowfall is a common meteorological phenomenon downwind of the North American Great Lakes during late fall and winter, the severity of this week’s event is very unusual. On Tuesday, several counties in and around Buffalo – which lies on the eastern edge of Lake Erie – experienced extreme lake-effect snowfall leading New York Governor Andrew Cuomo to declare a state of emergency. Seventy-two inches fell Tuesday and Wednesday, coming close to the U.S. 24-hour snowfall record of 76 inches set in Colorado in 1921. What’s more, a total of up to 108 inches, or nine feet of snow, is possible by Friday morning. 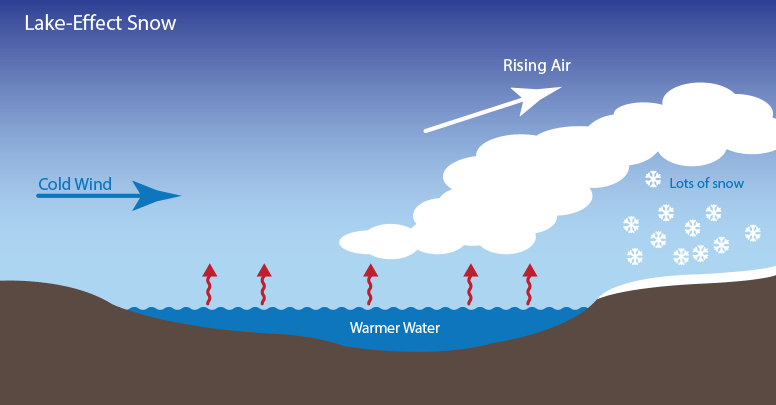 The severity of this week’s event has been driven by the unusual jet stream and atmospheric blocking patterns already discussed. The Arctic conditions created unseasonably cold atmospheric temperatures relative to average mid-autumn water temperatures. The result, according to meteorologist, Eric Holthaus, was a water-air temperature difference approaching 50°F that caused a “highly unstable atmosphere, in which thundersnow flourished and snow totals skyrocketed.”

Scientists also expect that climate change will intensify the lake-snow effect through increased water temperatures (though Lake Erie’s temperatures during this week’s event were average for November.) Warmer water temperatures increase the water-to-air flux that feeds additional moisture to storms. Warm temperatures also have the potential to push back the date at which ice develops and can reduce overall ice coverage and thickness. As a general rule, the more open water exposed to storm systems, the greater the amount of lake-effect snow.

Moreover, scientists are observing long-term changes in ice cover as a result of climate change (though it was too early for ice on Lake Erie in this week’s event.) Annual mean ice cover in all the Great Lakes shows a significant negative trend, indicating that the ice extent in the Great Lakes has been decreasing since the 1970s. The following graph shows the trend in ice cover area (in square kilometers) since 1973.

(Image source: Climate.gov; prior to the mid-1990s, most years were above the long-term average; since then, most years have been below average.)

Much of the science is quite new, and scientists acknowledge that much more research is needed before we can fully understand the relationship between climate change, the jet stream, and lake-effect snow. That said, the research done so far points toward a more complete picture of the impacts climate change may already be having and what we might expect in the future. As a final note, it’s also important to remember that, amidst the unusual wintry conditions, 2014 is on track to be the hottest year on record globally.